Portrait of an Artist: John Nutter

Portrait of an Artist: John Nutter

When I was in my early 20’s (I’m 67 now) I was an architecture student at the University of Manitoba. Two of my professors had worked with the great American architect Frank Lloyd Wright, and through them, I became acquainted with his range of work and attention to every finishing detail, including his extensive use of leaded glass.

This stayed with me, and in the break between 2nd and 3rd year, I got a summer job at Western Art Glass, a traditional, almost old world stained glass studio tucked away in an industrial part of north Winnipeg, operated by two veteran stained glass painter/artists from Belfast. Almost all the work they did was for churches and synagogues—fully painted and stained glass windows, as well as restoration and repair work.

The owners assumed (as did I) that I would be going back to school in the fall and when they realized I was hooked, suggested I give some serious thought to the stained glass artist versus architect lifetime-earning potential. Undaunted, I stayed on! Soon afterwards, with my former classmate John Edwards, we formed our own company Design Glassworks. Renowned Canadian architect Etienne Gaboury named us for two amazing projects early in our careers—all the stained glass windows for the new St. Boniface Cathedral, and a large 10′ x 10′ window that we installed above the main entry to the Canadian Embassy in Mexico City. Numerous collaborations with Winston Leathers, artist and former architecture professor, led to a nomination for the prestigious Saidye Bronfman Award, recognizing excellence in craft in Canada.

In 1988, I moved to Vancouver and into Joel Berman’s Granville Island art glass shop. His main focus was sandblasted and kiln cast glass. While wandering my new Granville Island “home”, I came across Haida artist Bill Reid in his studio. He invited me to join his crew of artisans, led by sculptor George Rammell, working to complete the full-size pattern for his monumental bronze sculpture The Spirit of Haida Gwaii. I stayed on after the completion of that sculpture. 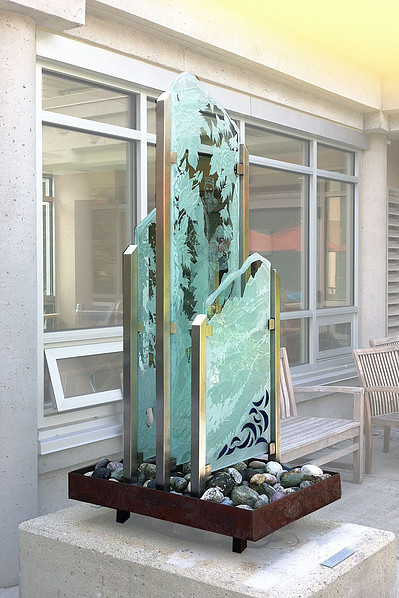 In 1997, l completed my first large installation in Vancouver, a leaded and sandblast-carved glass donor wall titled Water Music, commissioned by the Vancouver Symphony Society and installed in the Orpheum Theatre. In 2000, I won an international competition for the centerpiece sculpture at the Kelowna Airport, titled Escape to Stella Polaris. Following that, I was commissioned to produce two large hanging installations for The Irving K. Barber Learning Centre at the University of British Columbia – Two Compasses: Finding Eden and Beyond, and The Mystery. 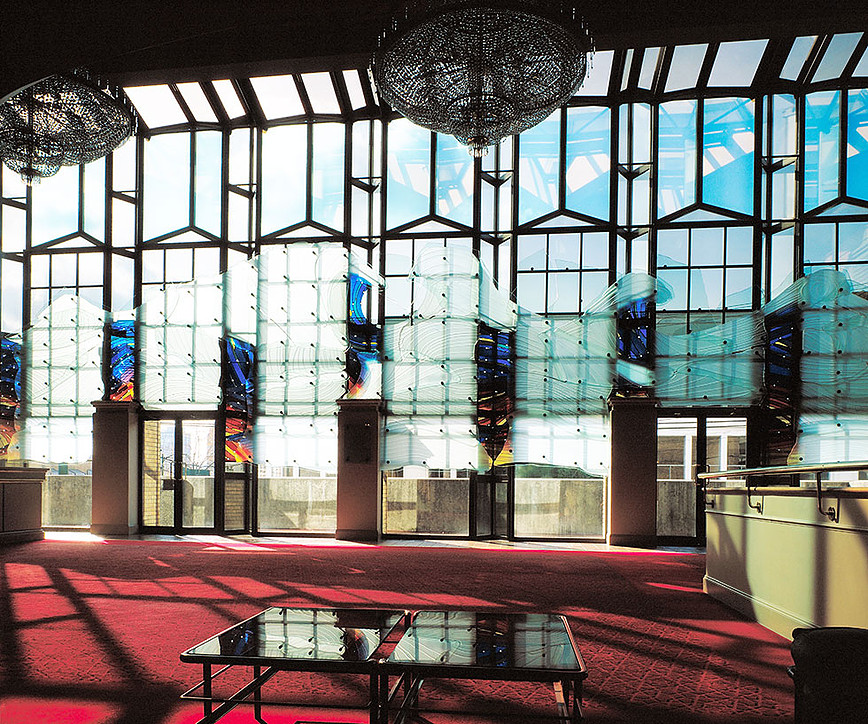 Last year, I was contacted by Camille Wenner to design and craft the Holocaust Survivor’s Tribute Wall for Schara Tzedeck Synagogue. Camille’s mother, painter Diana Zoe Coop and I have collaborated on a sculpture for the Louis Brier Home and Hospital.

A two week furnace casting workshop at the Corning Studio in NY introduced me to international glass artists working in a more intimate scale. Now I make smaller pieces as well as large architectural pieces, available through galleries or directly from my shop.

COVID-19
A Voice To Be Heard