Chai Tea in Celebration of Seniors

‘Life is not measured by the number of breaths you take, but by the moments that take our breath away.”

The Chai Tea celebration of seniors took place on Sunday, June 10th, at the Vancouver Peretz Centre. One hundred and thirty-five enthusiastic participants joined together to support the work of the Jewish Seniors Alliance and to honour Serge Haber on the occasion of his 90th birthday. The program was introduced by the master of ceremonies, Matthew Gindin, a Vancouver educator and journalist. 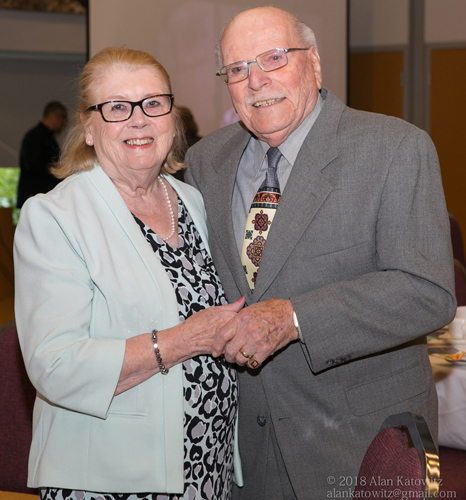 Shelly Rivkin brought greetings from the Jewish Federation of Greater Vancouver, emphasizing Serge’s effectiveness in bringing the issues of seniors to the fore in the Jewish community and the community at large.

Grace Hann, who runs the Peer Support Program with Charles Liebovitch spoke about Serge as a visionary who worked with vengeance to create this program. Grace was originally intimidated by his fervour but she soon realized Serge’s love and commitment to seniors. She told the story of a woman, sick with cancer, who had lost both her eyesight and hearing, and whose husband left her. Peer Support Services provided her with three levels of support: a peer counselor, a driver and a friendly telephone caller.

The coordinator of JSA Liz Azeroual and her coworker, Rita Propp, joined Charles and Grace for a singing tribute to Serge to the tune of This Land is Your Land. The audience joined in the rousing chorus. Music was provided throughout the afternoon by Dave and Julie Ivaz. Julie read a summary of Serge’s biography that had been provided by his children. It began in Romania and progressed in stages to finally arriving in Vancouver. A slide show of photos of Serge’s life experiences ran throughout and included a quote by Rabbi Abraham Twerski: “Life is not measured by the number of breaths you take, but by the moments that take our breath away.” The musicians Dave and Julie also sang a medley of Serge’s favourite songs. Ken Levitt, president of JSA, delivered a warm tribute to Serge. He emphasized the importance of “reinventing oneself” – this is what Serge had to do throughout his life both in terms of venue and occupation: from a Pharmacy student in Romania to surviving the Holocaust, running away through Europe, landing in Cuba for two years, and finally to Montreal in1950, where he worked as a sales representative in the clothing industry. He arrived in Vancouver in 1978 and ran Kaplan’s Jewish Delicatessen from 1978 until 2000.

It was at this time that he began to work with seniors. JSA started as a sub-committee of Federation and grew to become an independent organization. Serge is active and productive during this time, guided by his vision, passion and tenacity. 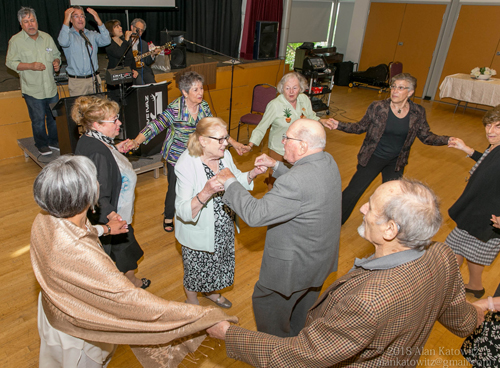 Serge’s response was moving and passionate. He was overwhelmed and humbled, beginning by reciting the prayer: Blessed art thou, O Lord our God, King of the universe, for giving us life, sustaining us, and enabling us to reach this season. Born in Romania in 1928, just before the Depression, he was accustomed to being constantly called ‘dirty Jew.’ This was a prelude to the Holocaust. He was a witness to many pogroms. Without documents, he left Romania in 1944, crossed Europe illegally, ended up in Cuba. With the help of an uncle in New York, he made it to Canada in 1950. He married Eleanor in Montreal in 1955 and had three children. Married for 57 years, until she passed away seven years ago. He has five grandchildren and one great grandchild. He acknowledge his friend and partner Sheila Gordon, who supports all his endeavors. 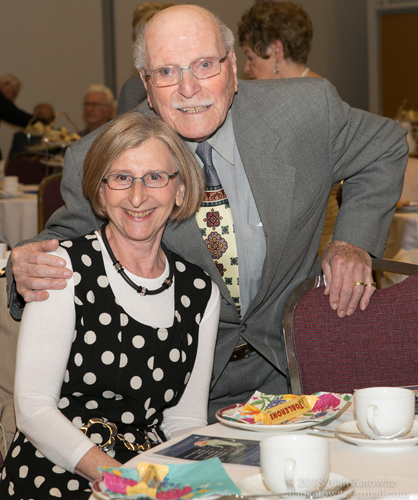 Serge expressed his concern for the future of seniors, whose number is growing. He lamented that, whereas JSA is in the business of prevention, the government is only concerned with repairing and remediating illnesses. The 70 volunteers who work with 175 seniors is not going to be  enough. JSA must continue to respond to the needs of both the Jewish and the general community. In his words “Sometime, somewhere in your life, rich or poor, you’ll need the services of JSA.”

Ken Levitt presented Serge with a gift of appreciation and Arnold Selwyn and Maurice Moses sang Happy Birthday. Throughout the afternoon tickets were drawn for donated door prizes such as restaurant meals. There was a fifty/fifty draw at the end of  the afternoon which was won by Carole Kline who donated the money back to JSA. The overall prize of a night at the Grand Villa Casino Hotel was won by Sheila’s daughter,  Julia Wallstrom.

Flowers were presented to Helene Rosen and Gyda Chud, VP of JSA, a card of thanks to Marie Doduck, a bottle of wine to Rita Propp, all in acknowledgement and appreciation of their efforts and the splendid results. Helene and Marie were the co-conveners of the Chai Tea.

Grace Hann started dancing with Serge and encouraged others to join in and soon there was a circle of dancers and others clapping to the lively music. Everyone enjoyed the wonderful tiers of sandwiches that graced every table as well as the fruit and birthday cake, provided by Gala Catering. Delightful portrait caricature drawings by artist Katie Green were available all afternoon. It was a thrilling and fun afternoon that was thoroughly enjoyed by all the attendees.

Tribute to Serge Haber: A Passionate Unending Love for the Jewish People

From all corners of the community, we gathered to honour Serge Haber-in a room filled with love, laughter and the spirit of sharing. Our gifted writer Bob Markin stated-an everlasting moment of tribute to Serge Haber- our most admired and beloved ‘friend to all’. 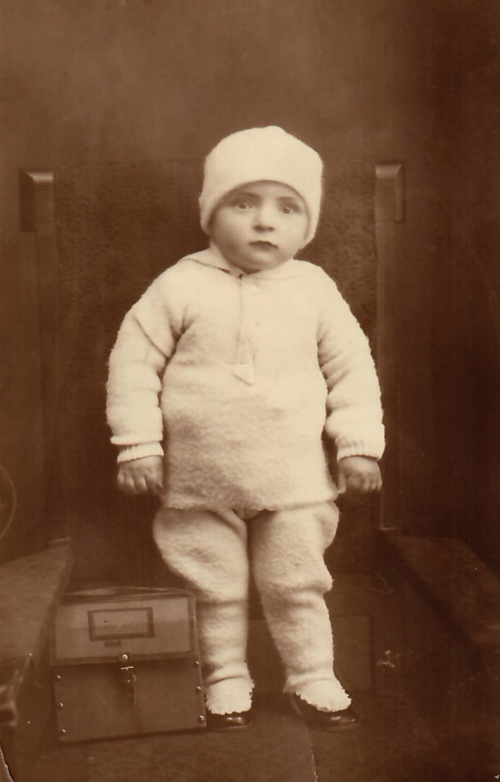 (to the tune of “This Land is your Land”)

The wonderful person whom we have the privilege of paying tribute to today on his milestone nonagenarian 90th birthday cares so passionately about our community seniors and the Jewish People in general, that their well-being is on his mind constantly…and yes, anytime day or night, he’ll heartfeltly voice his genuine and crucial concerns.

Serge Haber, our most admired and beloved ‘friend to all’, our treasured President-Emeritus, was at the forefront of the formation of Jewish Seniors Alliance (JSA), and his strong dedication to the Judaic directive of Tikkun Olam (Improving the World), has continued unabetted in word and action throughout the years as he so conscientiously helped JSA as well as many other needy Jewish causes.

The fact that we are here today enjoying the Chai Tea and the many other exceptionally-outstanding programs of JSA, is due in no small measure to you dear Serge. With your strong, principled, kind disposition and fortitude, you have significantly championed substantial improvements in the quality of our lives.

Serge’s life experiences profoundly shaped his character. Born in Romania in 1928 to his beloved parents Leon and Liza Haber (z’l), he lived amongst the horrors of pogroms and the Holocaust, to which he lost family members…and of which he barely survived himself due to fortunate circumstances.

At the end of the Second World War, he took two years of university study in pharmacy in Bucharest. An extensive real-life education followed when he left Romania in 1947, travelling to and living in Austria, then Italy, France, Cuba, Montreal, Canada in 1950, Dallas, Texas in 1967, followed by stays in Toronto and Montreal, and finally – most fortunately for our community – to Vancouver in 1978.

Serge’s community work is so outstanding, attainments of which he strongly credits to the impetus of his beloved wife of 57 years, Elinor (z’l), and to his desire to stress the importance of actively practising Jewish values to his three devoted children, Wanda, Geoffrey and Stephen.
We are in awe as we recall his dedicated community leadership throughout the years, which includes serving the internationally-based United Synagogue of Conservative Judaism (highlighted by a two-year term as vice-president); Congregation Beth Israel (with 18 years’ of executive, chairmanship, men’s club leadership); Vancouver Holocaust Education Society (passionately urging racial tolerance at its Annual Symposium and ongoing schools programs); and UBC Hillel (helping bring about a much-needed new facility). He sat for 19 years on the Louis Brier board and was a director of Jewish National Fund for 18 years.

In recognition of these outstanding attainments, he has been meritoriously honoured throughout the years by numerous organizations, including Louis Brier, as one of its Outstanding Eight Over 80 recipients; by Congregation Beth Israel, with its President’s Award, for community-involvement; and by Simon Fraser University, which named him Man of the Year, the first Jewish person to receive the recognition.

Ever on his mind are seniors…and especially Jewish Seniors Alliance. “I am trying so hard”, Serge has said, “to do crucial work on behalf of community seniors, whose numbers will double in the next 10 years. I see JSA becoming the most important Jewish organization in the city because of its many much-needed programs, and I hope that seniors here will soon have their own building providing a variety of essential services.”

He has warmly and strongly emphasized that “I have an unending love for the Jewish People generally, and in particular, for those in our community”. Please be assured dear Serge, that the feeling is unquestionably mutual. On this, your milestone 90th birthday, we enthusiastically say Mazel-Tov, and heartfeltly affirm to you, with gusto and with all our love – Onwards to 120 – precious friend! 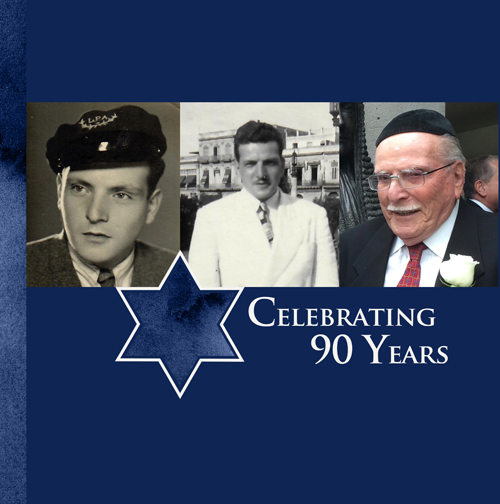 Click here to view the special photobook presented to Serge Haber at the Chai Tea, celebrating 90 years of family, friends and community.

BACK TO Special Events