“To make one person smile – you have done something beautiful for the world, and that’s what volunteers do each and every day.”

“Volunteers do not necessarily have the time – they just have the heart.”- Elizabeth Andrews 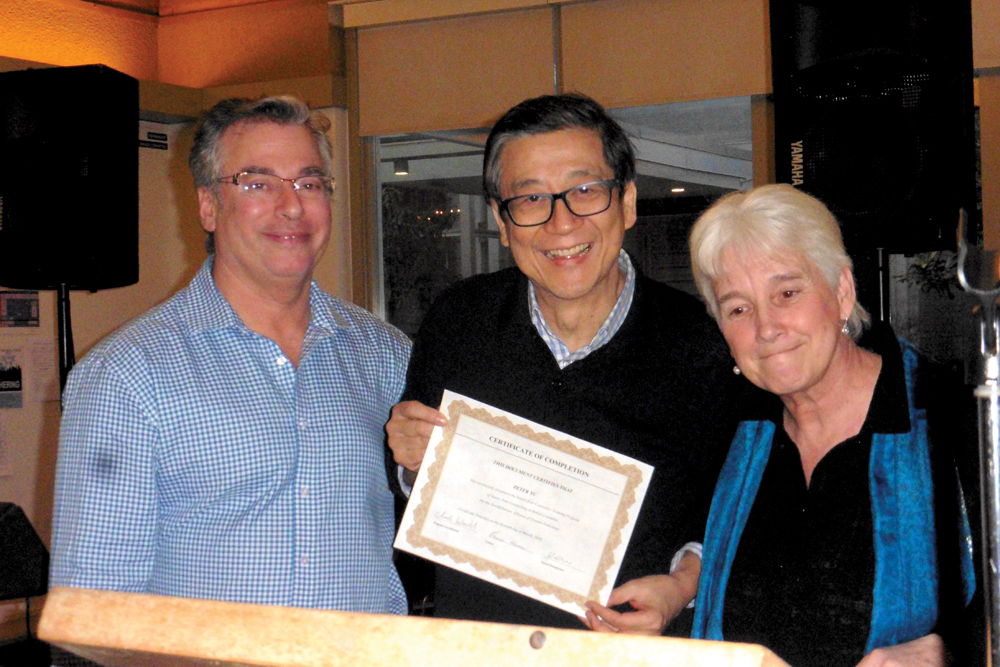 Nowhere was that quote more in evidence than at the ceremonies for Senior Peer Suppot graduates and Volunteer Appreciation event held on Wednesday March 7th at the JSA. Charles Leibovitch, Senior Peer Support Services Coordinator, warmly welcomed all gathered, remarking that we were ALL volunteers, and thanked us for attending. Grace Hann, Senior Peer Support Services Trainer and Supervisor, echoed Leibovitch’s words adding that one of the most difficult and important things emphasized in their program was learning how to listen without imparting one’s own advice.

Certificates of completion were handed out and photographs taken to record those special merited moments. Hann called upon Louise Blouin, one of the graduates, who opened her remarks by saying how fortunate they all were to have a caring teacher like Grace Hann to emulate as an excellent example of what a Peer Support Volunteer could be. In thanking JSA for having instituted the Peer Support Program, Blouin confessed that Peer Support can take over your life. The graduates spoke about how much they, themselves, had derived from the giving of themselves. Lines from poetry were often quoted by the graduates in their talks: ‘Thanks for listening to me’- was one that resonated to all. 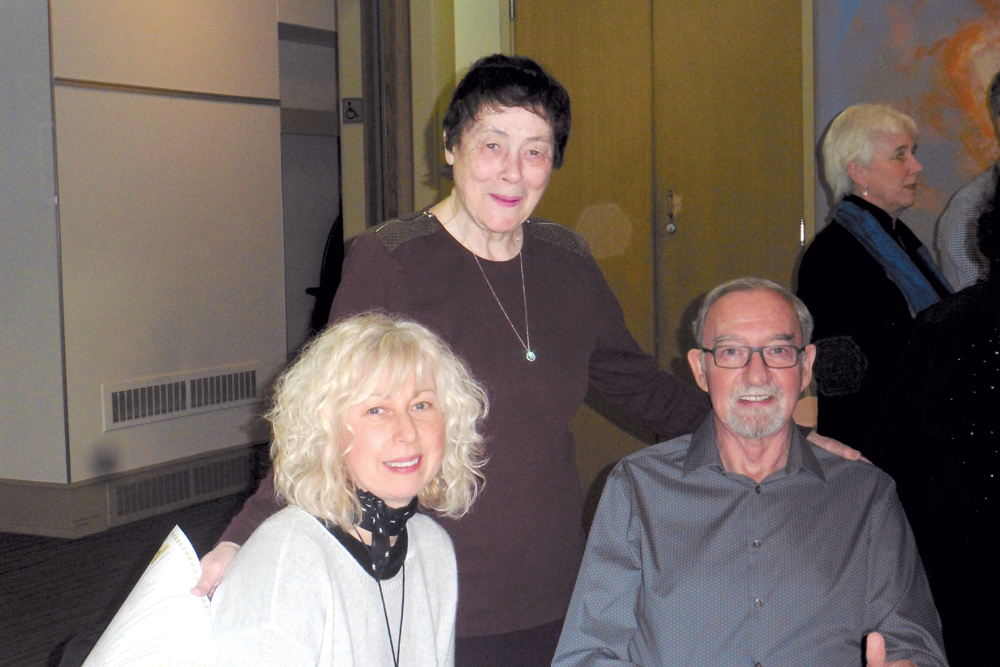 Wayne Davis said that Charles and Grace were people who see matters and solutions in a merciful and kind manner. Davis ended with a line from the poem Anyway: “The good you do today, people will often forget tomorrow; do good anyway”.

Other graduates commented that everyone needs help and that this help was mutually good for both client and volunteer. While employing the skills learned, to empathize, to reflect and to mirror via role playing, a better understanding of the other’s needs is gained. Listening has the power to lighten the sense of powerlessness and loneliness of another. Susan Moore called everyone donors, of time and of compassion. All were striving to make a difference, whether it was in helping family members or the community at large. Without volunteers, there wouldn’t be a JSA.

Donna Cantor of Jewish Family Services said that JSA’s Peer Support Program was a vital addition to the community and that she had sent many clients to avail themselves of this service through the years. Cantor had heard one man bemoan the fact that LONELINESS can kill even the STRONGEST of men. Just having the silent phone ring, without yet having had the benefit of a conversation made a difference. 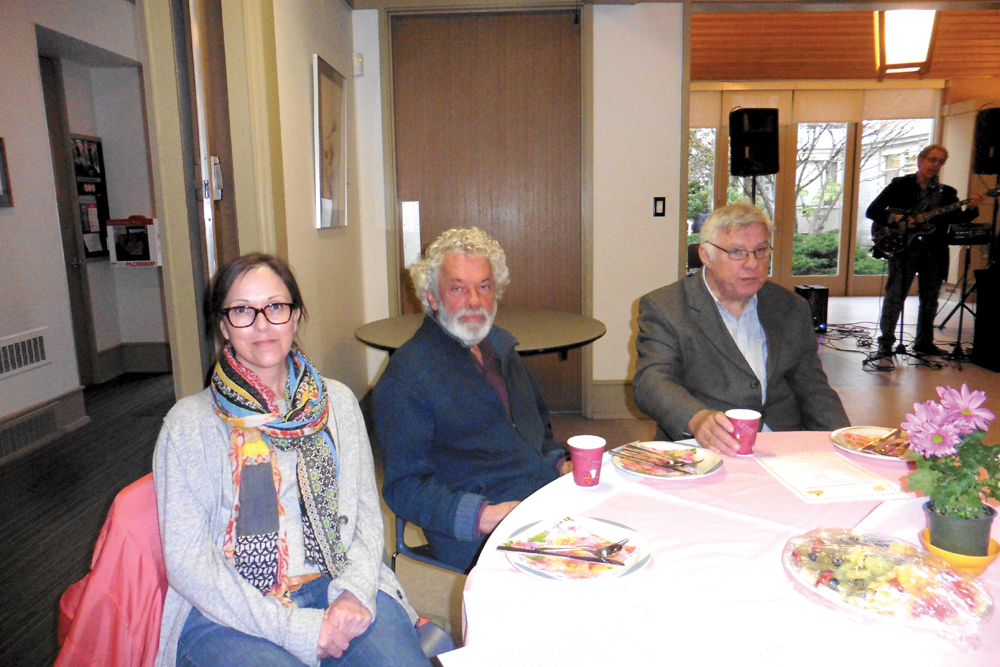 Delighting the crowd were the magical moments when Odelon and Charles sang together and then on their own. Hann and Leibovitch captured everyone’s hearts when they too sang to the crowd. The melodious music entered our hearts and lifted us body and soul, throughout the evening when David and Julie Ivaz played and sang. Seeing the audience surge to their feet, expressing the joy felt in the room and join in the celebration of the evening by dancing, was a memory we all took home, smiling.

Grace Hann thanked the JSA Volunteers, Rita Roling, Gyda Chud, Jackie Weiler, Liz Azeroual and Rita Propp, for their outstanding assistance in creating the Spring-like atmosphere with flowers and floral napkins. Hann admitted she had used real china as one of her students Peter Yu had set a high standard when inviting the team to his home. Hann and Leibovitch then surprised me with flowers as thanks for my contribution to the evening and that warmed my heart.

Ken Levitt, JSA President, proudly stated that JSA is what volunteering is all about. It is the backbone of the organization, working with isolated seniors—seniors helping seniors; generously giving the gift of themselves. Levitt quoted the late Grace McCarthy, “What the power of one can accomplish”. One person can make an enormous difference in the world. One person – actually, one idea – One discovery can cure a disease or spawn new technology to benefit or annihilate the human race. You as ONE individual can change millions of lives.

STEP 1 – Hover over the main image and click the “play” button in the bottom right corner to watch in a slideshow version. Or simply use the arrows to scroll through the photos.

STEP 2 – OR, click the small thumbnails along the bottom to view them larger.

STEP 3 – OR, click the magnifying glass in the bottom right corner to open the image larger and use the arrow to the right to scroll through each photo.

BACK TO Peer Support Graduation