Another special evening for Jewish Seniors Alliance filled with enthusiasm, fun and a blending of Senior Peer Support graduates, Friendly Visitor graduates along with our great team of volunteers. 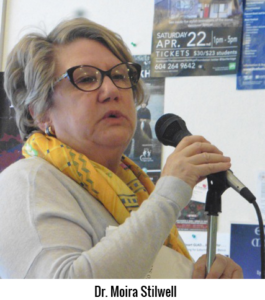 Grace Hann and Charles Leibovitch welcomed all the volunteers and the graduates. Hann then thanked all of our funders and acknowledged Shelly Rivkin from Jewish Federation who was unable to attend. Ken Levitt sent warm wishes and a special thank you to all volunteers.

Dr. Moira Stilwell was introduced as a former M.L.A. who cares deeply about seniors and their issues. Stilwell said if there was anything she could change about her life it would have been to become a volunteer earlier in her life. She expressed the importance of volunteering and how positive it is not only for the clients but for the volunteers themselves. She said her life became much richer through volunteering.

Serge Haber was introduced as President Emeritus and as a man with a clear and passionate vision. He spoke about the challenges facing seniors and the incredible role volunteers play. Serge placed great emphasis on the partnerships which have been created between JSA and the volunteers. He expressed gratitude and appreciation for the support and hope they provide for seniors who are facing loneliness and isolation. 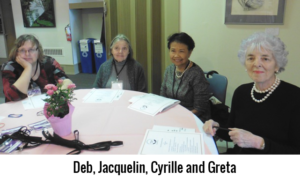 Nancy Chu spoke about her experience as a volunteer and expertly defined our role by using the acronym ABC’s. Her message was based on accepting our clients wholeheartedly; recognizing they are not friends, as our value systems may be different; and understanding that one day we may ring their bell and there isn’t an answer. In summary, Nancy used three words, Acceptance, Boundaries and Connection. She stated “By accepting my clients feelings unconditionally, I can connect with them on an emotional level while observing and respecting boundaries”.

Other highlights consisted of Senior Peer Support graduates and Friendly Visitor graduates doing something special to showcase their training.

Hann was the recipient of praise and appreciation from her graduating students of the senior peer support training course. They thanked her by singing their own version of “Amazing Grace”, which included phrases about active listening and non-judgemental communication.

The graduates as well spelled out her first name ”Grace” as an acronym and took each letter to represent an aspect of peer support: 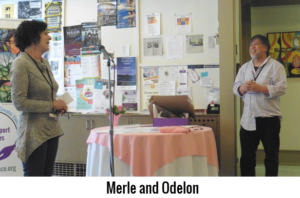 Teresa, a Friendly Visitor Graduate spoke of the difference it would have made to her mom if only she had a visitor who would brighten up her day.

Merle and Odelon did a cool skit depicting Grace and Charles. Merle called into the office to speak to Grace Hann and was told by Grace to just hold a moment, I have another call. Merle then mimicked another call, this time for Charles from Odelon, asking for help with a client. Charles responded with “sing to them”! Odelon then brought people to tears by singing “Somewhere over the Rainbow.” 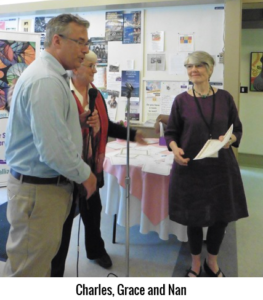 The magical evening continued as the band David and Julie Ivaz warmed up the volunteers by playing some popular folksongs by Leonard Cohen and Simon and Garfunkel. The little dance floor became very vibrant with disco tune “We Are Family”! The wafting of the barbeque by Baruch Azeroual through the hall created an ambience of anticipation and a much needed rest! Watching volunteers connect and bond while sharing a meal is a unique experience. Charles and Odelon made singing look easy as they held us spell bound with their incredible voices and exuberant energy for several songs.

Deborah James wowed us with her beautiful rendition “As Time Goes By”. Charles led the group with two appropriate songs, “Lean On Me” and “You Raise Me Up.” It was thrilling to watch so many different people from diverse backgrounds join in and use song to illustrate important messages of love and humanity. A freilich time was had by all!

Many thanks to Pam, Rita, Gyda, Liz and Rita for creating a fabulous ambiance and to Binny who circulated throughout the evening capturing some stunning photos!

STEP 1 – Hover over the main image and click the “play” button in the bottom right corner to watch in a slideshow version. Or simply use the arrows to scroll through the photos.

STEP 2 – OR, click the small thumbnails along the bottom to view them larger.

STEP 3 – OR, click the magnifying glass in the bottom right corner to open the image larger and use the arrow to the right to scroll through each photo.

BACK TO Peer Support Graduation