It had been an emotion-filled weekend, and having our JSA program deal with inclusivity while the Jewish communities everywhere dealt with the horrors of what hatred can do, seemed to have been a strange pairing, but with healing properties.

We are deeply saddened by the tragic events that occurred at the Tree Of Life Synagogue in Pittsburgh, where 11 people were murdered and many others were wounded.

The afternoon program was to be a time of unity, of solidarity with other cultures. We learned that the love and caring of our seniors, our elders in families, is a universal value and touches all hearts in much the same way, as well as presenting similar problems. 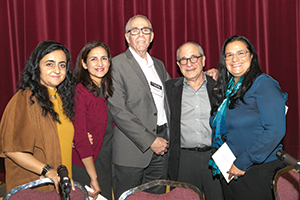 Zarghoona Wakil is the manager of the Settlement and Integration program with MOSAIC, a non-profit organization which helps newcomers who come to Canada. She also supervises MOSAIC Seniors’ Club which provides services to seniors of different cultural backgrounds.
Sinder Kaur is the Executive Director of Health Services at S.U.C.C.E.S.S., a Multilevel Care Society that provides a continuum of excellent, culturally-appropriate care services to seniors with different needs. She has worked in different leadership roles with a passion to help seniors age in place.

Deanna Lewis, known as Kalkalath, her ancestral name, is recently elected to the Squamish Nation Council, focusing on Elders and their care. Kalkalath is a former teacher, working to preserve her Skwxwu7mesh Culture, Spirituality and Language. Raised with the teachings of her grandfather, she knows the importance of knowing Who you are and Where you come from!

Rabbi Philip Bregman was the Event Chairperson. He served as Senior Rabbi at Temple Sholom from 1980–2013. He is a founding member of JCD (Jewish Christian Dialogue) since 1995. He now functions as Jewish chaplain for U.B.C. and is very involved with Hillel BC.

In welcoming the crowd Ken Levitt, President of Jewish Seniors Alliance, wisely turned the subject of the Pittsburgh massacre over to Rabbi Philip Bregman who spoke as only he could about the brutal slaughter of people at prayer, a subject which was uppermost in all our minds. He highlighted the many calls he received expressing sympathy and condolences after the Pittsburg massacre. He remembered standing outside the Mosque in Vancouver years ago, after the shootings at the Quebec City Mosque. There six Muslim worshippers had been murdered and 19 others wounded. Now, he has received a

message of sympathy from their Imam. He emphasized the difference between the word “killing” which is accidental, and the word “murder” which is intentional slaughtering.

Where do we go from here, he asked? We bury our dead, we mourn and we meet as a community. We must never allow hatred to win.

The audience stood for a moment of silence in commemoration of the 11 murdered and the many badly injured victims, including several police officers.

Rabbi Bregman then introduced the three panelists, asking them to share a little about themselves and to address the issue of how their various cultures celebrate their seniors.

How interesting are the facts that Zarghoona is originally from Afghanistan, then lived in Russia. She came to Vancouver 12 years ago and is now studying at SFU for her Master’s degree in Public Health. Sinder is Punjabi born, lived for 20 years in Hong Kong and moved here 17 years ago. Deanna’s Squamish Nation family was removed from Khatsahlano (Kitsilano) in the early 1900s. Her main efforts are to teach both adults and children the Squamish language.

So many cultures, so many traditions, yet how gratifying for us to learn that both Zarghoona and Sinder feel as we do when they answered Rabbi Bregman’s questions. They both emphasized that it is truly our own seniors who hold the past history in their hands and only upon opening up their hearts are they able to tie generations together and build upon that knowledge for the future generations.

How difficult it was to hear that Deanna had to learn about her heritage from others, as her history was erased and harshly taken from her elders. It was she who sought to learn that history and is now feeling connected again, learning her own language and the ways of her people through her grandfather. A common thread was that grandparents and grandchildren have that special link which allows them to relax and truly enjoy one another while the parents are occupied with the comfort and needs of both these family groups.

Claudine Malto, Director of Community Programs at the Mt. Pleasant Neighbourhood House spoke about their new initiative, Multicultural Circles, where seniors share stories, food, textiles, cooking classes, dance and exercise. She noted that people like to sit in “pockets” which creates a divide. The motivation for this project is to answer the question “How can we best co-exist?”

A huge thank you to all who put this afternoon together, seamlessly and with much thought.

Larry Shapiro, thank you for ending the afternoon with one of the best vocal advertisements for the Jewish Seniors Alliance that we have ever heard. I am proud to be part of this magnificent caring organization. You have made the sun come out, even on this rainy, tear-filled day.