Pnina Granirer: Light Within the Shadows – A Painter’s Memoir

Jewish sages teach us that since birth every Jew will undergo 42 journeys during the lifetime. The first journey is from the mother’s womb into the world of the living and the last one is the exit from life. The remaining 40 journeys may have migratory, spiritual, developmental or evolutionary natures. The purpose of the journeys is to develop the steps and the goals that we need in order to reach our fullest potential. In her 2017 book Light within the Shadows – A Painter’s Memoir Pnina Granirer allows the reader to accompany her on her journeys as a woman, an artist, a wife, a mother and a teacher.

Pnina Granirer has structured her biography as a play with three acts. Each act takes place on different continents and centres on important personal achievements and milestones. She likens her retrospective journeys as “looking through a back window of a speeding car.” The further the car goes the vaguer the memories. When she talks about her birth-country Rumania, she does not elaborate on restrictions and persecutions, rather she looks with her senses: the physical beauty of the country, the vivid colours of the rhododendrons, the smell of the paints and her brief but profitable career as an artist.

When she touches on her memories of being a Jewish child in a Nazi controlled country, she does so from a sheltered and innocent child’s point of view. She has more to say about her own and her family’s experiences after the Russians “liberated” Rumania and exchanged one totalitarian regime for another. According to Ms. Granirer, anti-Semitism is embedded in Rumanian culture, so remaining there under communism was to continue to face physical and cultural annihilation. Thus in 1950, fifteen-year-old Pnina and her mother were issued travel papers to Israel.

Following the establishment of Israel as a homeland for the Jewish nation, the country enacted the Law of Return which welcomed all Jews to settle in Israel and to receive full citizenship. Within a few years Israel’s population doubled and the Granirer family was part of that demographic. Without hyperbole, Ms. Granirer gives a matter of fact account of the difficulties facing the new immigrants as they tried to acclimatize into an Israeli way of life. She is an optimistic realist and in a humorous way she tells the reader how to get on with it, live in the now and keep an eye on the future.

During her twelve years in Israel, the author experienced many life-altering changes: she got married, gave birth to a son and began to carve out a career as a professional artist. With true convictions, she tells the reader that her time spent in Israel was the best in her life. She fell in love with the “cream-coloured Judean hills, the bright blue sky, the chirping birds and the taste of honey.” Her life in Israel became the cornerstones which laid the foundation for future journeys and that gave her the courage to yet again prepare to move, this time to North America.

Her first view of American life was confusion as it did not resemble that of Hollywood movies. People lived in small unassuming houses, not mansions. Except for cars, the streets were empty and had no sidewalks. People did not congregate outside. If it were not for scattered toys on the green lawns, the houses appeared 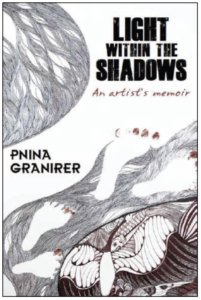 abandoned. Having no access to a car she felt isolated and lacked adult companionship. But, as a resourceful woman she bought a car and learned to drive. Albeit she was now mobile, her mobility did not alter her social status. “I was not Pnina Granierer anymore. I had become Mrs. E. Granirer. My identity disappeared the moment I arrived in the land of the free.” In spite of such a formidable obstacle, the thirst to create did not diminish. Her rise as an artist began to take root, but early in her career she had promised herself that her family’s welfare would always come first. And, like so many other women, she followed her husband’s professional career path wherever it took him in North America. However, after a short sojourn in Israel, the couple decided to move to Vancouver with its “snow capped mountains, glittering ocean and vivid rhododendrons.”

It was when securely settled in that beautiful city that her art started to mature and to reflect her own unique expressions. Creational inspiration was all around her and rather than experiment with multiple media she returned to her “first love: drawing.” When she writes about her creative process, the words are passionate and descriptive. She literally guides the readers to create pictures in their own minds, and for us who may be somewhat artistically challenged, the book includes photos of many of her works.

Pnina Granirer is a fascinating, courageous and inspiring woman who is accepting of other belief systems and cultures. In readable and honest language, she shares her trials and triumphs with the readers. It is evident that Pnina Granirer has travelled many of her 42 life journeys and has acquired much insight into herself and her surroundings.

On Thursday, Nov. 16, 6-9pm, in conjunction with Jewish Book Festival, there will be a book launch and talk by Pnina Granirer at 6 pm, and the reception for the exhibition at 7 pm.
At the Zack Gallery, JCC.
Free admission.

The book Light within the Shadows is available at the Isaac Waldman Jewish Public Library at the JCC.

Rita Roling worked in the social service field for over three decades. She is a firm believer in volunteerism and has for many years been actively involved with the Jewish Seniors’ Alliance. She is an executive of JSA and a member of the editorial committee.

Opinion: Build community around where seniors live
Frailty In Seniors – How To Minimize Your Risk For Injuries