Movies In The Spotlight: The Gatekeepers 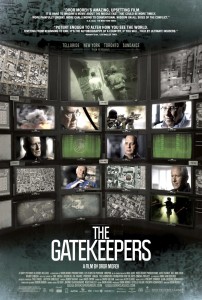 The Gatekeepers is a 2012 documentary film by director Dror Moreh that tells the story of the Israeli internal security service, Shin Bet (known in Hebrew as ‘Shabak’) from the perspective of six of its former heads. Dror’s ability to convince all six to bare their souls in front of the camera has produced an exceptional account of the recent history of Israeli life and security issues. Each one is candid, analytical and critical while still maintaining their individuality and unique personality. The film combines in-depth interviews, archival footage, and computer animation to recount the role that the organization plays in Israel’s security—from the Six-Day War to the present. Much of the material revealed had previously been classified or was considered highly sensitive.

A.O. Scott of the New York Times writes “Mr.Moreh’s amazing, upsetting film… is the opposite of nostalgic. It is hard to imagine a movie about the Middle East that could be more timely, more painfully urgent, more challenging to conventional wisdom on all sides of the conflict” (2012/11/26). Each man discusses his triumphs and his failures; the lapses of security, the violent treatment of Palestinians, and their pessimistic attitude towards the future of Israeli society and security. The film is indeed about ‘six Israeli spymasters on a shadowy past and a dark future.’ The six men together assess the failings of successive governments in pragmatic and unsentimental language. The director has been fair to all sides and the movie is guaranteed to trouble any one, left, right, center or head in the sand, with confidence or certainty in his or her own opinions.

The Shin Bet’s role behind the scenes for the past forty years exposes the secretive and unspoken policies of heads of state and their torturous decision-making process. The film consists of seven segments: No strategy, Just Tactics, Forget About Morality, One Man’s Terrorist is Another Man’s Freedom Fighter, Our Own Flesh and Blood, Victory is to See You Suffer, Collateral Damage and The Old Man at the End of the Corridor. Each segment more revelatory and more shocking than the previous one.

The Gatekeepers garnered multiple awards throughout North America, including being nominated for an Academy Award for best feature documentary film of 2012. In Israel it was praised and panned; the controversy and internal debate raged in heated discussions in print and on television.

The film is in Hebrew with English subtitles.