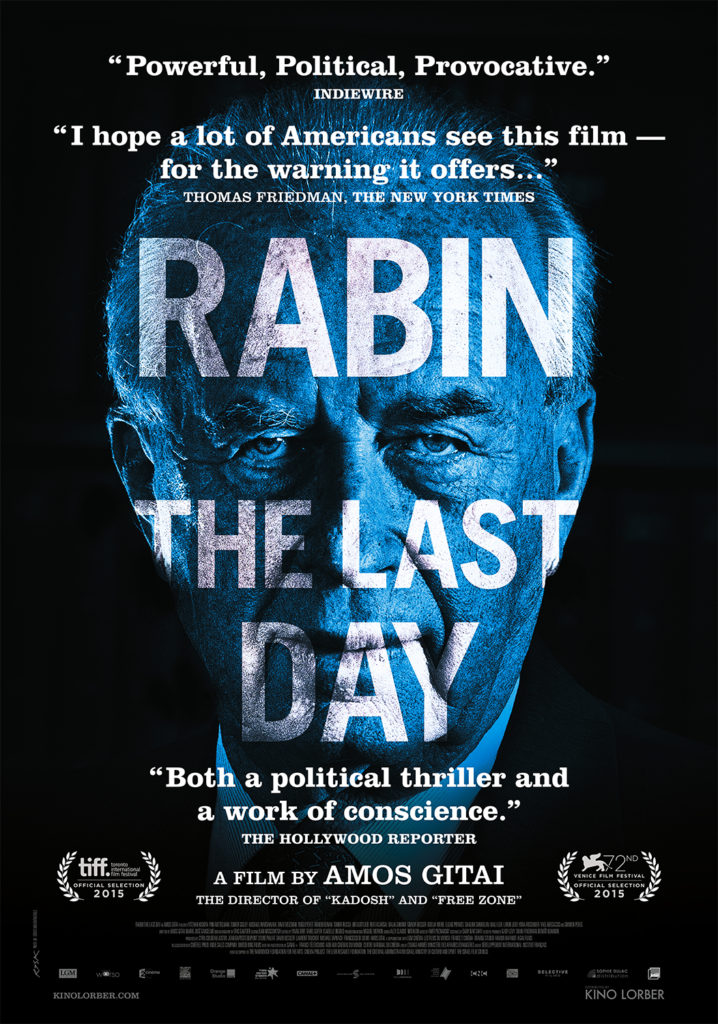 On Nov. 4, 1995, after addressing a large peace rally in a Tel Aviv square, Prime Minister Yitzhak Rabin of Israel was assassinated by a law student named Yigal Amir. The movie Rabin, the Last Day, is a mixture of documentary and historical re-enactments which not only relive the actual assassination but also, delves into the lapses of intelligence and the excuses of those responsible for the safety and security of the Prime Minister, as provided by the Shamgar Commission of inquiry, headed by the president of the Israeli Supreme Court. The film is long, at times difficult to watch, but most of all, it is brimming with information, threats, extremist propaganda and religious fanaticism; all of which was known to the authorities and yet, not taken seriously. Our attention shuttles back and forth in time as episodes before and after the attack are recreated by actors (A. O. Scott, New York Times).

Amos Gitai, the director, asks the question “How did it happen?” His anguish is palpable, so is ours. While the earnest bureaucrats of the commission question police officers and limousine drivers, a world of religious and ideological zeal is explored that exists at once in plain sight and beyond the reach of their inquiries. We, the viewer, share in his profound frustration.

If you saw the movie The Gatekeepers, ירמוש ףסה ,you remember the testimony given by these former heads of security, and you had similar reactions to their testimony. In retrospect, Rabin’s death is revealed as a sequence of failures, from that of the security and police, to the hospital doctors, to the investigators themselves (Peter Debruge, Variety). If there’s renewed urgency to this message today, it’s because Gitai clearly feels the region has allowed religious extremism and concomitant violence to become the norm in political problem solving; strategies that play out on a daily basis in the region today, even if the country has been lucky enough not to lose another leader. The movie is in Hebrew, with English subtitles, PAL format.