At age 81, Bill Gruenthal lives life to the fullest. For over 40 years, he has devoted countless hours of volunteer work to the Jewish community and beyond. He is truly a super-mensch, an example to both his fellow seniors and to younger generations. 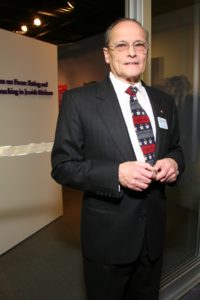 The youngest child of German émigrés Hans and Herta Gruenthal, Bill was born in Netanya, Palestine in 1935. It is said that he was the first child to be born in the newly established city, where his parents were partners in a small hotel. In 1942, Hans fell victim to typhoid, sadly leaving behind his wife and two young sons – Bill and his elder brother Martin. Herta eventually remarried and in 1947 the young family immigrated to Canada, settling in the small hamlet of Silverdale, just west of Mission, BC.

In the fall of 1952, Bill set out for Vancouver. Perusing the Vancouver Province, he chanced upon an ad for an insurance firm seeking a junior clerk. His interview evidently went well as he has remained in the business for over 63 years.

A few years later, in 1960, a friend invited Bill to a Sunday night dance at the old JCC at 11th Avenue and Oak Street. That night he met Noemi Yadlow, who had arrived from China in 1952. They were married the following year at Schara Tzedeck. They have been married for 54 years and have three daughters, two of whom live in Calgary and one who lives in Ladner.

Since the 1960s, Bill has been actively involved in many Jewish community organizations. The Gruenthals joined Temple Sholom during its early days and Bill served as treasurer during the campaign to buy the congregation’s first permanent location on West 10th Avenue. Bill recalls collecting pledges from $10 to $10,000. The family later joined Burquest Jewish Community Centre in the late 1970s, where Bill served as President for five years. He has been a supporter of the JNF for over thirty years and served as President from 1996 through 1999. Two years later, in November 2001, Bill became President of the Jewish Historical Society. In this position, he saw the organization through the transition into the Jewish Museum and Archives of BC, which opened in 2007. In the years since, Bill has remained a Director and become a member of the Council of Governors. More recently, Bill has joined the Board of Directors of Temple Sholom, overseeing the monthly Seniors Lunch Program. He is a member of the Jewish Advocates for the Conservative Party of Canada.

Bill is equally committed to community work outside the Jewish community. In 2015, he concluded fifteen years as a Director of the Nikkei Place Foundation. For over twenty years he has been a Director of the Canada Japan Society of BC. In the 1950s, he was Photo Editor and a member of the Editorial Board of the Junior Chamber of Commerce Magazine.

Miraculously, amidst all these commitments, Bill finds time to follow his passions for gardening and walking the breathtaking parks of Metro Vancouver. Tonight we honour and thank Bill for his generous and incomparable devotion to community. Thank you Bill.