Written by
Megan and Rachel Jackson

Our grandpa, Ralph Jackson, is always ready for new adventures, travel, service and family fun! We can’t believe he will actually be turning 90 years old on August 17, 2016. He was born in Glasgow, Scotland in 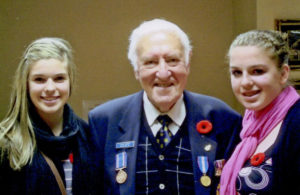 1926, and after many adventures throughout the UK, he came to Vancouver in 1966 with our grandma, dad and uncle, who were just small boys at the time. In 1994, he became the proud grandpa of us – twin granddaughters! He beamed as he held us up in each of his arms – so we’ve been told.

Over the past 22 years we have had the good fortune of having Grandpa live close enough to watch us grow up into adulthood. He has cheered us on at numerous soccer and softball games, thrown the first pitch at Nat Bailey stadium for the Vancouver Canadians, and given his time to endless meetings and events as a loyal member of the Royal Canadian Legion, Shalom Branch #178.

Throughout our lifetime with Grandpa, we have watched him with pride as he provided service and mentorship to the Jewish War Veterans and to organizations associated with them. We have also watched both Grandma and Grandpa sell poppies at Oakridge Mall throughout the month of November. We have stood by Grandpa’s side at the Vancouver Cenotaph during Remembrance Day Ceremonies and we have walked together with him on behalf of the Shalom Branch to lay many wreaths. One time after the ceremony, he invited both of us to have lunch at the Louis Brier Retirement Home with all of the veterans. We were honoured as we watched our grandpa lead the group in old wartime songs.

Grandpa has been described as a “true example of service above self”. As a long serving member of the Shalom Branch he has held many positions on the executive. He is currently the Vice President and member of the financial committee, as well as being the President for many years in the past. He strives to continue to encourage others, including the younger generation to serve in the same or similar capacity. This is definitely a value that he has modeled for us.

Our grandpa will be reaching 90 this month, but don’t let that fool you – he is extremely “young at heart”. He has an amazing ability to keep up with the times, using his iPhone to text and to communicate with us. Throughout his life he has remained witty, joyful and optimistic about the future. He loves to sing, dance and make people laugh with his quick wit and sense of humour.

At 90 years old, grandpa will be recognized at the Jewish Seniors Alliance Annual General Meeting on September 15th for his tireless community work and service. This time we will all be cheering him on for his incredible achievement!

Thank you grandpa for showing us your dedication, service and honour towards the Royal Canadian Legion and other organizations. You have truly been a valuable role model for us! You’re an inspiration to all!