Fact:  On Saturday, November 13th, 1954 Milton Adelson set a new British Columbia record at the old Aristocratic restaurant at the south-west corner of Broadway and Granville streets for consuming the most French fries in one sitting! 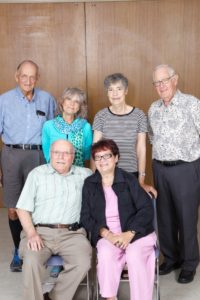 Milton, along with his parents and sister, moved from Winnipeg to Vancouver in 1949. Milton graduated from Magee High School and attended UBC. In high school he played English Rugby and Canadian Football as a tackle. We became friends in the early 1950’s through Habonim and Camp Miriam. In 1959 Milton married the former Vivienne Stusser and they are celebrating 57 years of marriage!

Most of Milton’s working years were spent with Nelson Brothers Fisheries. However, during the last 7 years of his working life Milton was self-employed selling insurance for fisherman’s boats, i.e. fisherman who were engaged in the fishing industry. Milton reported that these were very successful years due to
his vast knowledge of the commerce of fishing

Milton’s interest in volunteering began with his board membership on Camp Miriam and Schara Tzedeck Synagogue.  More recently, Milton served as Treasurer for L’Chaim Seniors Day Care a position he held for four years. In his own words, “We were helping people. It was a very small group.  We supplied an important service to elders, many of whom were aged and frail”.
About 10 years ago Milton was approached by the Serge Haber to join the Board of JSA. Serge told Milton, “I need you!”  With that command Milton served as JSA Treasurer for 8 years retiring from that position 2 years ago. He continues as a board member. Again in Milton’s words, “I had much pleasure in working with the Board of Directors. The work we were doing made it all worthwhile”.

His children, Sarah and Lyle describe their father as a very thoughtful and active parent. Sarah said “Dad always encouraged us personally and professionally with compassion and tolerance. He is a very generous and loving father-in-law to Jordan and Lylia, and a Zaida to Oliver, Julia, Mikayla and Dany. “As a family we are so proud of our dad for all of his accomplishments and how he has contributed to the
Jewish community.”

Milty, all of us at JSA and those who know you personally take pleasure in honoring you. You talk the talk quietly but you walk the walk (literally) with much vigor.  May you and Vivienne have many more anniversaries, great times with your children and grandchildren and may our friendship continue for many more years.