SENIORS IN THE MOVIES: Still “Spry” and “Feisty” After All These Years – and ‘Still Alice’

Jewish Seniors Alliance > Entertainment > Movie Reviews/Theatre/Song and Dance > SENIORS IN THE MOVIES: Still “Spry” and “Feisty” After All These Years – and ‘Still Alice’

The Hundred-Year-Old Man Who Climbed Out the Window and Disappeared; Elaine Stritch: Shoot Me; All is Lost; Fading Gigolo and Elsa and Fred are my choices of films because these senior roles break the mold, the stereotypes, of what is generally considered “senior” behaviours. They battle against “ageism” which refers to stereotyping and prejudice directed at individuals and groups because of their age. Still Alice is a movie in a class of its own, which shines the spotlight on early-onset Alzheimer’s disease. 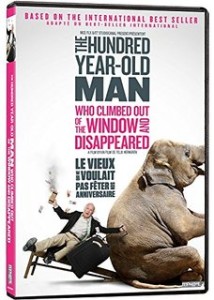 The Hundred-Year-Old Man Who Climbed Out the Window and Disappeared (2013): Centenarian meets Biker Gang! Allan Karlsson, a 100-year-old explosives expert, escapes from a retirement home and mistakenly drags a big suitcase onto a bus. Destination—the next town, a deserted village—that was the only place his pocket-change would take him to. This film adaptation of the book by the same name is the work of first-time Swedish director Felix Herngren. The actor and comedian Robert Gustafsson who plays Allan has been called “the funniest man in Sweden.” This movie is, uncharacteristically, a romp in history and a chase by the bad guys after the good guys. It is filled with drama and violence provided by the members of the Biker Gang. But do not be deterred, it is all done with panache, with wit, with superb timing, a sense of humour and a knowing wink and nod at the absurdities of politics and history. Most of all, we relish the spontaneity of Allan’s propensity to dive into the unknown.

Elaine Stritch: Shoot Me (2013): Is it possible to absolutely love a 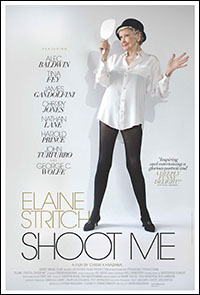 documentary? Elaine Stritch: Shoot Me is so good, I am having trouble finding superlatives strong enough and enthusiastic enough to describe my experience watching the film. It is entertaining, frightening and inspirational. Here is an 86-year-old actress, dancer, singer, comedian who is still performing all of the above to appreciative, loving audiences. She is brutally honest about her fears of aging, of sickness, of disappointments but, she carries on notwithstanding! We follow her on and off stage, we see archival footage that showcases some of the great moments from her career. It is a bold, hilarious and poignant portrait of a talented performer and a brave, astute human being. Fading Gigolo (2013): shows us the Woody Allen we want to see, witty, wise and unneurotic. John Turturro’s script begins with the premise that a florist named Fioravante (John Turturro) has the sexual magic touch for the lonely, libidinous wealthy matrons of New York City. Woody Allen plays Murray, the broke bookstore owner-cum-pimp that Fioravante steps up to help out. Woody Allen plays the only role he knows how to play, i.e. himself. It is a joy to witness him being so lovable, witty and wise – and so unneurotic. The cast features Sharon Stone and the cream of the New York character players such as Chris Walken, James Gandolfini, and Ellen Barkin. They all contribute to an irresistibly antic warmth and sweetness. It is a charming film. 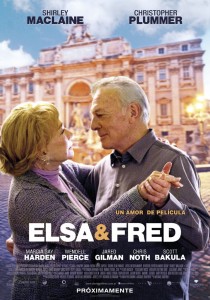 Elsa and Fred (2014): stars two great actors, Shirley MacLaine and Christofer Plummet. He is a grouchy curmudgeon, she plays a zany, distracted and sick woman. This is a romantic comedy with the shadow of sickness and death. The two characters discover that it is never too late to love and make dreams come true. Elsa wants to re-enact the famous Fontana di Trevi scene in Rome from Fellini’s film La Dolce Vita. Notwithstanding a superb cast and some good one-liners “I don’t do anything that is so-so,” “How much did you laugh in the years of your life?” and interesting locals, the movie is only mildly successful. I had difficulty really getting involved in these people’s lives. See for yourself. 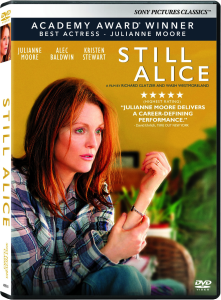 Still Alice (2014): is the movie that all seniors, and all baby-boomers HAVE to see. Still Alice delivers an experience which is brutal and beautiful. When Julianne Moore picked up her Oscar for best actress, Alzheimer’s disease went mainstream. “So many people with this disease feel isolated and marginalized” said Julianne Moore in her acceptance speech for her role as a professor stricken with early-onset Alzheimer’s. In her role as Alice, she is in her 50’s, she starts forgetting her train of thought, becomes lost in familiar place, confused. She is conscious and alert to each shattering loss. Her husband and children are supportive but disbelieving “Why won’t you take me seriously I know what I am feeling. It feels like my brain is dying, and everything I have worked for in my entire life is going.” We cannot but empathize with her, this is not an easy movie to watch. Dan Levitt writes “The movie perfectly depicts the way people often react to others who have memory impairments and other mental conditions who do not fit in with the expectations we have of how someone should behave…Still Alice represents the calm before the global silver tsunami storm affecting families, friends, and society’s beliefs about how people with Alzheimer’s and other dementias should be treated.” We all need to see and hear the message of this movie. We owe it to ourselves and to family members and friends. (www.vancouversun.com/story_print.html?id=10830551&sponsor=true).