Pnina Granirer: Portrait of an Artist 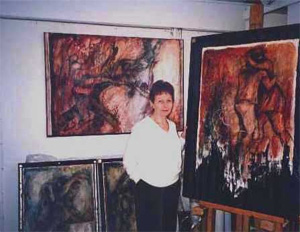 In the 30-minute documentary Pnina Granirer: Portrait of an Artist, Pnina says: “My life is like a cut diamond; each facet reflects a part of my life.” She is indeed multi-faceted and a jewel in our midst. She recently celebrated her 80th birthday and 50th year living in Vancouver. Her artwork reflects her lifelong process of dislocation and associations; from Romania to Israel (4 years of study at the Bezalel Art Academy in Jerusalem), to the United States and then to Vancouver (4 years of printmaking at the Print Studio). European, Israeli and West Coast First Nation influences come together in a confluence of line, colour and textures. To walk about her studio and along her walls covered with paintings, drawings and multi-media works is to travel through time and space, experiencing her discoveries and her wisdom.

Dancing and the beauty of the human body in motion have been major themes in her paintings. As a classically trained artist, she is a master of anatomy. She works from sitters and photographs; but her mastery is in the expressive drawings that she creates with speed and flexibility of line. During her exhibition of  The Dancers’ Suite, two dancers interpreted the drawings and paintings hanging on the walls of the Yukon Art Gallery.

The role of women, from Biblical times to the present represents Pnina’s quest for knowledge and understanding. She explores images of female icons and the relationship between nature and culture in her Carved Stones suite, of which she wrote: “in this series there is an attempt to integrate stones carved by (mostly) men and seen as a symbol of culture (considered superior to nature), with stones carved by the elements and seen as a symbol of nature. Her further exploration of this topic produced The Trials of Eve, a new look at the myth of Adam and Eve in the form of a thereact play narrating Eve’s courtroom trial and the tribulations that follow, ending on a note of hope for humanity. One of the paintings, entitled The Verdict portrays Eve being found guilty for all time, particularly by Christian theologians with their doctrine of the Fall and the woman’s culpability in it. However, for Granirer, Eve’s eating of the fruit is “a deliberate and independent act, the first act of free will.”

“Her paintings are a mysterious, moving painterly testimony to the lavish imagination, extensive knowledge and extra-ordinary skills of the artist.”

On the Internet, go to https://www.youtube.com and search for Pnina Granirer; there are many videos about her and her work. Below is an example:

SENIORS IN THE MOVIES: Still “Spry” and “Feisty” After All These Years – and ‘Still Alice’
“Feeling Financially Squeezed” and “Downsizing”