GETTING TO KNOW YOUR MEDIA – Spring 2019

GETTING TO KNOW YOUR MEDIA – Spring 2019

Netflix continues to dominate the field as it produces strong original content, both movies and television series. All of these streaming services entice cord cutters, people that forgo expensive cable packages to purchase cheaper online subscriptions. Three Identical Strangers is the bizarre true tale of triplets (Jewish) separated at birth. The documentary starts in 1980, as a 19-year old Bobby Shafran attends his first day of university only to find unfamiliar classmates greeting him as Eddy. Eddy is an on-campus celebrity. Eventually, Bobby and Eddy meet and are contacted by David, whose adoptive mother noticed a pair of twins in the newspaper who looked exactly like her son, down to their shared pudgy hands. The question at the center of the film essentially concerns ‘nature versus nurture’. The brothers keep the film grounded in reality, which turned out far different than it looked when they got their first taste of fame on the talk show circuit. Watch it, you will never forget it. (Available on Netflix) The Honourable Woman is a truly gripping Middle East thriller about a British-Israeli woman seeking to bring prosperity to the Palestinians. The director Hugo Blick avoids lazy pigeonholes of good and evil, exploring the complexities of the people involved in this taut and perfectly controlled 8-part mini-series. Maggie Gyllenhaal is captivating as Nessa Stein, a London-based heiress, she is remarkable playing a principled but conflicted woman. There is a complicated, convoluted mix of action, suspense and family melodrama which is portrayed with beautiful images and superb acting. A must-watch series. (Available on Netflix). 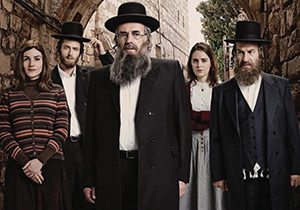 Shtisel לסיטש, a television drama, is about a Haredi family in the crowded and impoverished neighbourhood of Geula in Jerusalem. This show about people governed by strict Jewish law, following ancient customs and living in austere conditions became, for me, a very Secular Jew, an addictive, delightful experience. At the heart of Shtisel is the relationship between Shulem Shtisel, a recently widowed Talmud Torah principal, and his youngest son, Akiva, a bachelor who still lives at home. Akiva must find a bride. But, his artistic skills as a painter lead to a stipend, a studio and a solo exhibition. There are many additional strands of dramatic narrative involving other members of the extended Shtisel family. The series does not shy away from dealing with real-life issues facing Ultra-Orthodox Israelis, such as the pressure to marry early and the difficulty of supporting large families. Shtisel became a huge popular success among viewers of all backgrounds, including some Ultra-Orthodox Jews without televisions who admitted to watching it via streaming video on the Internet. Oy Vey! Warning: Addictive, prepare to be glued to the screen. (Available on Netflix). Bodyguard is a propulsive political thriller in six episodes imported from the U.K. Richard Madden is a security officer and military veteran. This show excels at both the daring, gasp-inducing twist and the methodical construction of slower-burning thrills. The finale features a lengthy sequence of almost physically painful tension, a bravura bit of television that could only exist on a show in which we’ve been primed to understand that truly anything can happen. Scary, visually stunning and super television. (Available on Netflix).

Genius: Einstein, His Life and Universe 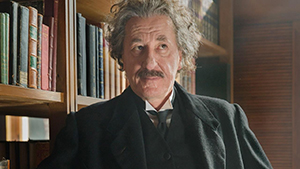 Genius: Einstein, His Life and Universe is the dramatization of the life of Albert Einstein created by the National Geographic network. Not only did Einstein revolutionize physics, but he also lived during calamitous times, including two world wars, and had an eventful personal life. The 10-episode series creates a portrait of the very human fellow behind the immortal equation. The show repeatedly jumps from the older Einstein (Geoffrey Rush) to the younger, (Johnny Flynn) and from one actor to another. It is captivating, enlightening and a joy to watch. (Available on the National Geographic Channel and at the Waldman Jewish Public Library).

The Challenges of Aging Alone: The Solo Senior
SENIORS IN THE MOVIES – Spring 2019