To Honour and Remember

To Honour and Remember: Memoirs of My Father, Arthur Propp

Though I have written and self-published a number of books, the most powerful one, without question, comes from my father’s old manual typewriter; a manuscript on faded yellow paper that he pounded out so many years ago. My knowledge of German is very limited. So now, after all these years, I have finally learned so much about my parents’ story that I never knew. 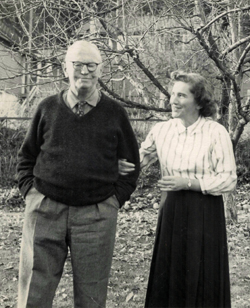 In the times of Hitler, my mother, Elsa, escaped Germany by ship to Brazil. My father, Arthur, who was much older and had been imprisoned by the Nazis after Kristallnacht, managed eventually to leave by air from Berlin—literally just a few days before war was declared. This was due to the assistance from a woman from the British underground who, in the last few moments before a flight from Berlin was ready to take off, was able to get Dad onboard.

Bolivia, South America, was one of the few countries that accepted Jewish immigration in those dark years. In Sucre, where an instant and sizable Jewish community evolved, my father was a part of the board for a section of a cemetery allotted to the Jews. His memoirs brought life back in detail to so many stories about those refugees, their legacies and how they helped each other in this city almost ten thousand feet above sea level.

My parents married in Sucre, Bolivia, where I was born in 1944. In 1950, we came to Vancouver and, a few months later moved to Gibson’s Landing where Dad, already in his sixties, operated a sawmill called Sucre Lumber Co. I went to school there from grade one to grade twelve. This small picturesque village by the water is where the CBC popular series “The Beachcombers” was later filmed. In the late 1960’s, after my father died, I wrote to Elie Wiesel about my parents. To this day, I still reflect upon my parents’ lives and their story which still continues to haunt me. Wiesel encouraged me to keep writing. Although we never met in person, the six or seven kind notes I received from him over the years continued to be a source of light. The last one was dated April 5, 2013.

Finally, properly edited and proofread, my father’s memoirs have been published in their original German, Von Koenigsberg nach Kanada and translated into English as Where the Straight Path Leads. Both are available from Amazon, or by calling me at 604-277-6570.

There are so many emotional memories, (as faint as they may be) over the many years and it is difficult sometimes to truly process for us who were and always will, and continue to be, the ‘children’….

Dan Propp is a retired school teacher and photographer. A self-taught musician, he sings the old time songs – with accordion – at seniors’ homes throughout the lower mainland.