NOSTALGIA: From Vancouver to Toronto by Train

Jewish Seniors Alliance > Entertainment > Inspirational Blogs/Acts Of Kindness > NOSTALGIA: From Vancouver to Toronto by Train
W
hy should one take a train from Vancouver to Toronto? Because be it Air Canada or the others, they just don’t ‘fly’ with me. For this ‘old goat’ a more relaxing train of thought is to experience part of our nation’s expanse well-grounded via the Canadian, eh? For three days, three nights and a bissel more it’s possible to read, reflect and literally ‘keep track’ of everything from memories to puns, trying to branch out and figure out where perhaps they ‘stem’ from. Then it hits you ‘big time’ on the prairies at a ‘stop over’ in Melville, Saskatchewan. An old train station house has the power to help our imaginations recall our past, be it a shtetl in Yahoopitville or an old Schul in Toronto, Ontario.

First a few serious rhyming lines: On a train you read a bit of Bashevis Singer, perhaps The
Magician. Riding on a train, there comes at once that inner admission. The days of the small shtetls, come back again. Where once there was a sense of wonder, where once we had been, and what we had seen.

Then lighter thoughts return to a bit of recent nostalgia such as the 1950’s black and white shows on the wonder called TV.

THE GREAT SHOWS WE REMEMBER

Abbott and Costello with ‘Who’s on first’, Jack Benny’s suffering violin teacher, played by Mel Blanc. For all those great shows, many of us still thirst. Fred Allen, George Burns and Gracie Allan, for the memories, of course, Bob Hope, we thank.

Steve and Eydie, George Gobel, Phil Silvers, Sid Caesar. Eve Arden, and the way the character Conklin, the principal said, “Miss Brooks!” What would we have done without the great writers such as Mel Brooks? Comedians Myron Cohen, Wayne & Schuster, plus Shelley Berman on the Ed Sullivan ‘Shoe’. Carol Burnett, who got that big first break with Gary Moore. They all helped our sense of humor to renew.

Whatever our day-to-day hardships, that 17-inch or huge 21-inch screen was  a cure! Plus there were jugglers, the acrobats, even pantomimist (shhhhh) Marcel Marceau! Red Skelton and all that amazing TV Show Biz! Burton and Liz, Lana Turner, “Golly-Whiz!” And Walter Cronkite saying, “And that’s the way it is.” Dan Propp

Please visit www.Nostalgicroads.Weebly.com Search for Song CD’s by Dan Propp via cdbaby.com and also www.soundcloud.com, plus books via www.amazon.ca. Songs and videos available on YouTube by searching Dan Propp.

Dan can be reached at ajpropp@shaw.ca. 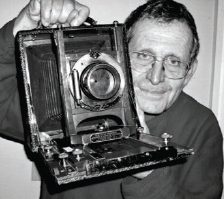 Movies in the Spotlight: Self Made בורג
Portrait of an Artist: Ira Hoffecker: Berlin Identities