The City of Vancouver’s infamous “Animal Control” squad hounded and chased me, my friends and our dogs out of Shaughnessy Park. Several $250.00 fines had been handed out. It was time to move to an official off-leash dog park.

The closest one was Oak Meadows on West 37th Avenue.  I resented having to drive there, but that was the reality. Gradually I got to know other dog-owners and for the first time in Vancouver, I became friendly with other Jewish people who lived in the Oakridge neighbourhood. Oak Meadows became my destination every afternoon; a place for exercising the dog and chatting with friends. Oak Meadows has large expanses of green grass, with some large Pine trees and a lovely view of the mountains to the north. 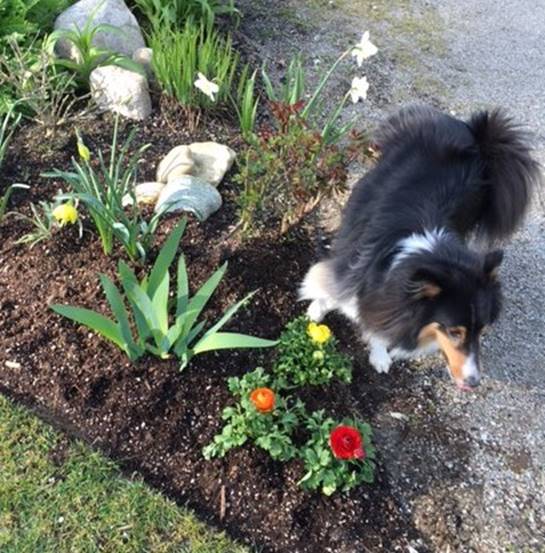 I came to the shocking realization that green can get very tedious; I needed to see some colour. There were no flowers. I decided to create a garden behind the bench at which we all hung out. I arrived with shovels, rake and other tools and started removing grass, digging down into the hard earth. The little stone that was peeking out of the ground turned out to be huge; my friend Ellen took notice. She pitched in and we kept digging. When we finally got to the bottom of the stone, we realized that it was too heavy for us to lift out. We both stopped and looked at each other. Then I had a flash of insight; I had read that the ancient Egyptians lifted and raised up long heavy pieces of granite by forcing sand under them. I announced this theory to Ellen and we started lifting the stone a half-inch and shoving pebbles into the space between the stone and the bottom of the pit. Believe it or not, after an hour and a half of lifting and placing pebbles, our boulder was almost up to ground level.  We were finally able to roll it out of the hole, fill the garden with top soil and then roll the stone back into the garden as an ornament. The next day I planted perennials and annuals, added some driftwood and called it a “garden.”

People were amazed and pleased. Compliments were shared. Someone asked if I had permission. “Of course not,” I said. Two weeks later; there was an ominous sign in the garden indicating that this garden was illegal and had to go! Ellen called the number on the sign; we arranged a meeting with a Parks Board official and alerted all the dog owners.  He arrived to face 15 angry people who wanted to keep ‘their’ garden. A compromise was reached; the garden was moved so that it did not interfere with the lawn mowing, I promised to tend it.

That was three years ago. Since then we have created a delightful sitting-area with chairs and flower pots under a huge pine tree. We keep a water bowl with fresh water filled for the dogs. Every spring we ask the city for a picnic bench which is placed in the shaded area. There are now two long planters with annuals at either side of the park bench. At this moment, they are full of purple, pink and white hyacinths in bloom, and the fragrance is delightful. The original garden has been expanded (surreptitiously) to include rose bushes, rhododendrons, lilies, hellebores, chrysanthemums and poppies.  Oak Meadows has become a meeting place for friends and dog-owners. Just before Christmas we had our first pot-luck supper at one of our homes. People of diverse cultures gathered to share their favourite ethnic foods, their love of dogs, and a sense of community and friendship.

Voltaire in Candide wrote that “tending one’s own garden” is not only a private activity but also productive; I think he was saying “mind your own business.” My garden-tending activities have won me a place in my community and a feeling of belonging and participation with my fellow citizens.

Oma & Bella, Preview
Why These Millennials Live In A Retirement Home