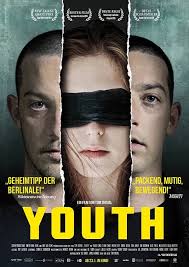 If you are fascinated by twins you will love this Israeli tragic farce of twin siblings who foolishly take it upon themselves to save their family from financial ruin by kidnapping a girl from a wealthy family as she walks home from school. The brothers (twin actors David and Eitan Cunio) are deeply into “Hollywood action films” such as Rambo and The Black Dahlia. When Yaki, a recent army recruit, returns home with his rifle, they put into action the plan which Shaul has been preparing. We had been watching him stalk and photograph Dafna, a high school classmate.

Director Tom Shoval has captured the primal bond which exists between the brothers, in their physicality and in their mannerisms. The viewer will find them endearing and repugnant at the same time as they struggle with the problems of a depressed father, a mother who carries on regardless of the threatening situation; and the young captive whose life they endanger. The kidnapping and ensuing complications make for a harrowing spectacle of cruelty and bumbling from which the camera doesn’t shrink (S. Holden, New York Times, 08. 20, 2015).

Dafna (Gita Amely) is a feisty, strong victim, bound and gagged in their building’s basement; her family does not answer the phone. As she get accustomed to her surroundings, she appeals to Shaul, even as the flaws begin to appear in his plan. Stoking one brother’s insecurities while the other is out of the room. Yaki and Shaul are kids doing stupid things with good intentions. You will love and hate the film.

Stephen Holden writes “Youth creates an acrid vision of a country under economic and military stress, as the middle class is disappearing and the proliferation of arms is putting assault weapons in the hands of teenagers.” In Mr. Shoval’s grim view, Israel is under siege from within.

The film is in Hebrew with English subtitles.