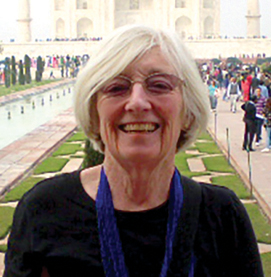 Johanna Hickey lives her life each day helping others.

Born in England, she was raised in a large Irish family, spending time with many older aunts and uncles (some were her biological aunts and uncles and others were close family friends; that is, they were part of the immediate family, visiting her and her parents’ home regularly). It was these relationships that made an early impression on her, stimulating her interest and awareness of older adults. She soon developed an interest in helping with senior’s needs and issues.

In 1951 she and her parents moved to Toronto where she grew up. She got her undergraduate degree in English and her graduate degree in criminology. She later moved to Ottawa and became the Director of Community Relations for Corrections Service of Canada. She worked in administration and helped pass the bill to abolish capital punishment. During her career her concern for others grew. She believed that people who were incarcerated could, with support and care, be reintegrated and productive in society upon their release. She worked with the attorney general of Canada, Mr. Warren Allmond.

Upon Johanna’s retirement, she became involved in a therapy dog program, bringing her pet dog to various seniors’ residences and assisted senior centres. She and her dog Michael would visit Yaletown House regularly, meeting with the senior residences. Johanna became an active board member with BC Pets and Friends, and, as a result, became aware of the desire of many seniors wanting pets to visit their residences. Johanna did initially take the Senior Peer Counselling course in 2004 in the West End but never used her new skills to see clients as she was then offered a job as a marriage commissioner.

In 2017 Johanna saw an ad from JSA to take a training course in Senior Peer Counselling. She found that the trainer, Grace Hann, was dynamic and engaging. She had a very positive experience. During this time Johanna continued her other volunteer endeavors with tutoring children with learning difficulties or with other life struggles and as well as being active with older adults in theatre at the Western Gold Theatre which performs at PAL Vancouver in Coal Harbor. Johanna sits on the Board of the Welsh Society of Vancouver.

Currently Johanna visits one female client weekly for the past two years and she feels that she has made a significant positive difference in her client’s life who is coping with a variety of health challenges.