SENIORS IN THE MOVIES: The Older, The Better

Jewish Seniors Alliance > Entertainment > Movie Reviews/Theatre/Song and Dance > SENIORS IN THE MOVIES: The Older, The Better

“Age is an issue of mind over matter. If you don’t mind, it doesn’t matter” wrote Mark Twain. He must have been thinking of the current cohort of first-class actors of stage and screen who continue, in their “old age” to fascinate and entertain their audiences. I can honestly say that the words “riveting performances” came to mind when watching these films. Youth (2015) is an Italian lyrical paean to a world (unattainable for most of us) of wealth, sophistication and a culture in decline. Two old friends, Michael Caine (age 82) and Harvey Keitel (age 76) spend time at a luxurious spa in the Swiss Alps. They ruminate about love, careers, and mostly, their inability to remember past events. The director, Paolo Sorrentino, concentrates on the pathos of male senescence. Old age is presented alongside sensuality and youthful vigor; it is a romantic, playfully melancholic, idyllic film.

play (1980) by Ronald Harwood. Two of the great actors of our time Anthony Hopkins (age 79) and Ian McKellen (age 77) give “riveting performances” (N. Genzlinger, New York Times) which nailed me to my seat. This two-man show has an aging Shakespearean actor, Sir, barely functional, struggling with dementia, and his dresser, Norman, devoted and loyal, in a travelling theatrical company beset with problems. Set in London during World War II, bombs falling, actors doing stage-hands’ work; the machinations of backstage theatre life reveal themselves in exquisite detail.

Floride (2015) is a funny, heart-warming French movie about an 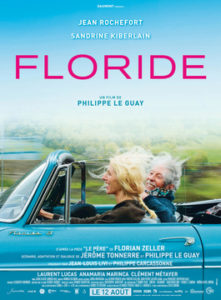 elderly gentleman and his eccentric (think “Alzheimer’s Disease”) behaviours towards his daughter and his aggrieved housekeepers. French star Jean Rochefort (age 86) plays this “lead role as juicy as a sun-ripened orange” (P. Debruge, Locarno Film Review) with sensitivity and verve without lapsing into sentimentality. Floride is a gentle, irreverent film which blends humour and pathos to crowd-pleasing effect. 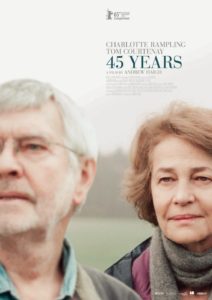 long-married couple in small-town England. They are about to celebrate their 45th wedding anniversary, when the postman brings a surprise—a letter from Germany. “They’ve found her.” This is a story of memories, frozen in time, lodged and yet lost, until they are revealed, in focus, again (C. Knight, National Post) provoking jealousy and vital hidden truths.  45 Years is a triumph of understatement and narrative circumspection as the ghost inhabits their lives and crisis ensues. 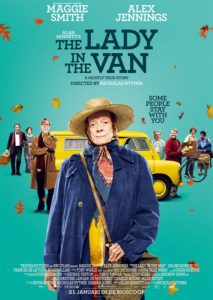 “mostly true” experience with Mary (Maggie Smith, age 81) a well-spoken vagrant who takes up residence, for 15 years, on his driveway. The movie is largely a mystery which begins with a car crash, and develops into a tale of the relationship between the immaculate, persnickety Mr. Bennet (Alex Jennings) and Mary, who dresses in castoff clothing, is unkempt and unbathed (S. Holden, New York Times). Maggie Smith is a tottering, staggering force of nature determined to owe nothing to anybody (T. Robey, The Telegraph).

Hitler’s Children (2011) is an extra-ordinary documentary by Israeli director Chanoch Ze’evi, which examines the shame and guilt 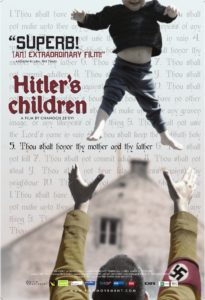 felt by the children, grandchildren and grand-nephew of Hitler’s senior Nazi commanders, Amon Goeth, Heinrich Himmler, Hermann Goering, Hans Frank and Rudolf Hess. The film also features Israeli journalist Eldad Beck, grandson of Holocaust survivors. The central tension of the movie revolves around the fact that the people being interviewed had nothing to do with what their father or grandfather did; yet within their families, denial of the atrocities committed is common. The five characters create “normal” lives for themselves, all the while, processing the deeds associated with their name and the atrocities of their Nazi heritage.  In tracking down five descendants of Hitler’s closest accomplices, the director encourages them to talk about how their lineage has affected their lives. The movie is quiet, simple and soaked in sorrow (J. Catsoulis, New York Times). the Nazi death camps, and now must have facial reconstruction to repair the damage caused by a gunshot wound. Her only motivation is to find her husband, a piano player called Johnny.  The plot builds suspense, and the ending is a legitimate corker (R. Brody, New Yorker). The final scene infuses an old popular song with the full weight of cruelty, betrayal and hope (A.O. Scott, New York Times).

Crossword Puzzle To Test Your Vocabulary Skills
Who Will Care For The Rapidly Aging Population?