SENIORS IN THE MOVIES 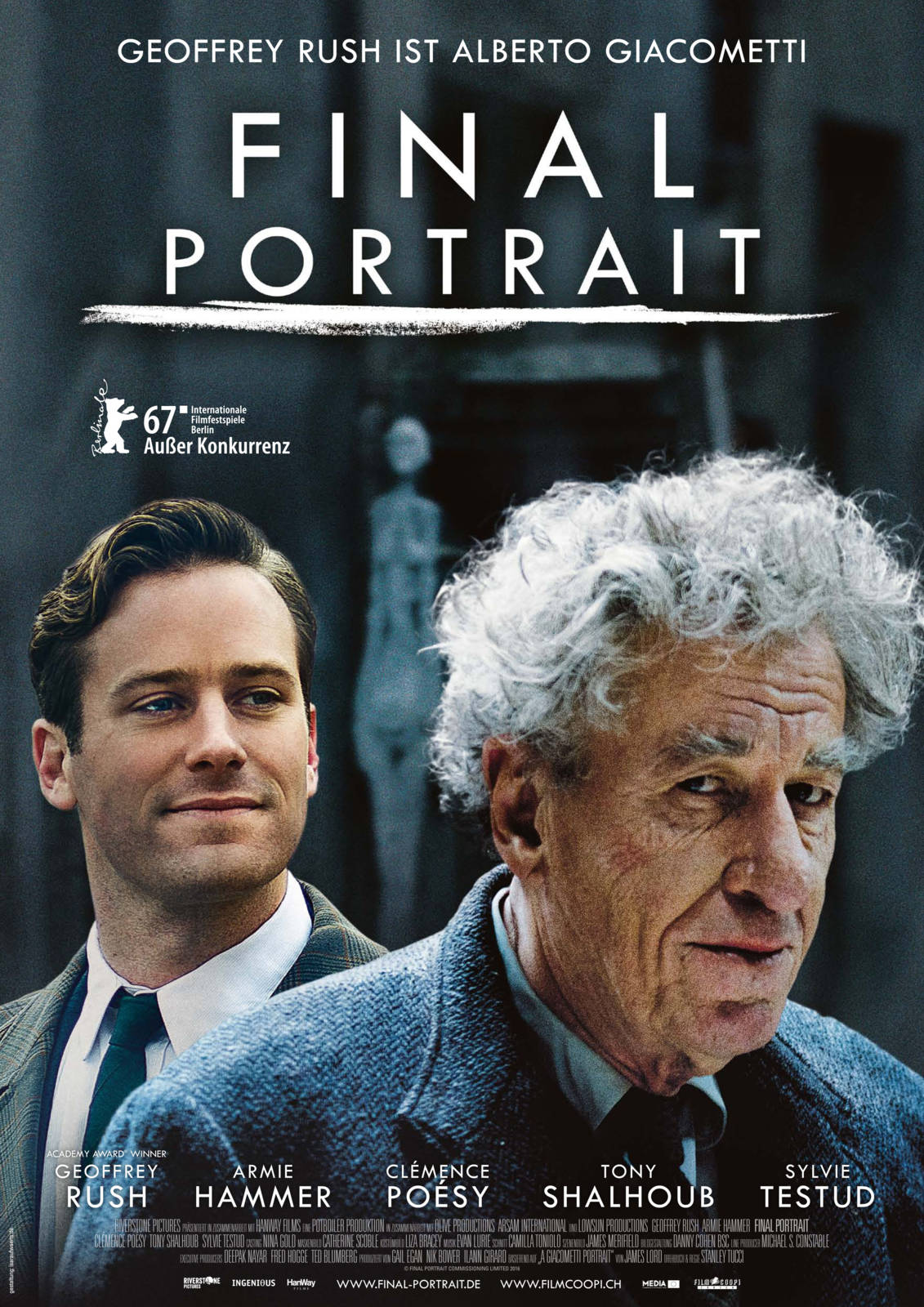 Geoffrey Rush (age 67) shines as Alberto Giacometti in Stanley Tucci’s witty Giacometti sketch. Based on a true story, James Lord (Armie Hammer), an American critic and admirer of Giacometti agrees to sit for a portrait. What was supposed to take a day, drags on for weeks. We experience the genius of the artist and the agony of his self-doubt. This was to be Giacometti’s last portrait. The film is about the artistic process as dependent on destruction as on creation. The artist is selfish, willful and unkind, yet I was drawn to his every utterance. I, personally, am eager to learn of such details, others perhaps will find the movie slow and dreary. The world of Paris and its artists and models is keenly felt and seen. 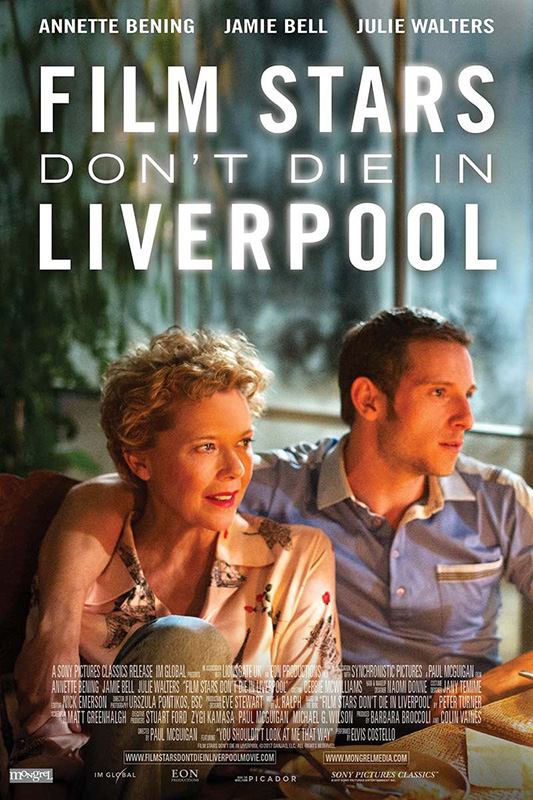 This film is a real-life romance adapted from the 1986 memoir of the same name by Peter Turner. Unfolding during the final years in the life of the actress Gloria Grahame (who died in 1981), the movie recounts her unlikely last-gasp love affair with Mr. Turner, an English actor. Peter (Jamie Bell) and Gloria (Annette Bening, age 60) develop a credible chemistry that renders age irrelevant. At the time they met, Gloria was 54, Peter was 26 years old. The atmosphere of playful sexiness fades all too soon when Gloria becomes desperately ill. She retreats to the home of Peter’s mother in Liverpool for care. Ms. Bening acting is wonderful, she’s marvellously mutable, shifting subtly from insecure to prideful and back again as her allure drains and her strength fails. Mr. Bell makes Peter’s hurt and confusion touchingly real. It successfully depicts the ordinariness of the life of a former star. I would have liked to see more about the “star” in her heyday. I guess I will have to read the book. 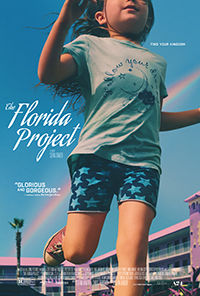 Moonee is six. She lives in the shadow of Disney World, home is a room in a motel called the Magic Castle. Mischievous and fearless, Moonee and her friends Scooty and Jancey, run wild with an exuberance you will envy. They live a “free-range existence”. Moonee’s mother, Halley, is doing whatever she can to keep them housed, clothed, fed and entertained. Willem Dafoe (age 63) is the manager of the tawdry motel and watchful guardian of the children. You will enjoy the pranks and the capers of the children as you simultaneously criticize this impetuous, dangerous upbringing of children. There is an undertow of sorrow, anxiety and dread in the film due to the grim circumstances. The viewer can find beauty in the blight. It casts a spell and tells the truth. Watch it. On Netflix. 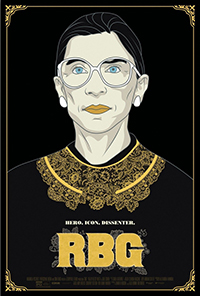 Ruth Bader Ginsburg is my superhero. I adored this documentary and its subject, a soft-spoken octogenarian, Supreme Court justice who bestrides the world like a colossus. The directors Julie Cohen and Betsy West based their film on the book Notorious RBG: The Life and Times of Ruth Bader Ginsburg. The minute I finished watching the documentary, I ordered the book (which I devoured)!

She was one of nine women in her Harvard Law School class of 500. After graduation, no New York law firm would hire her—or any other woman. Fast forward to 2017, Justice Ginsburg is 85 years old and has spent 25 years on the bench. The film is a partial explanation of how it all came about. The idea that women are equal citizens—that barring them from certain jobs and educational opportunities and treating them as the social inferiors of men are unfair—may not seem especially controversial now. RBG uses Justice Ginsburg’s own experiences to emphasize how different things were not so long ago and how she was instrumental in changing the laws in the USA. Ruth Bader Ginsburg’s enduring legacy will be her dissenting opinions from the majority rulings of the Supreme Court. 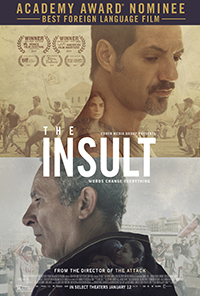 The Insult is a Lebanese film, directed by Ziad Doueiri, nominated for best foreign-language film at the 90th Academy Awards. The film’s roots lie deep in Lebanese politics, centering around a fracas between a Lebanese Christian auto mechanic named Tony (Adel Karam) and Palestinian refugee Yasser (Kamel El Basha). Its execution is pure melodrama flash and high courtroom drama (B. Hertz, The Globe and Mail, 25/1/2018).

A trivial, personal conflict explodes into something much larger, a drama that consumes a city and a nation. Eventually, the courts are involved. Memories of past atrocities are dredged up, and Lebanon’s civil war, which officially ended in 1990, seems on the verge of erupting all over again. The Insult is a fascinating history lesson and a reminder that resentment and hatred don’t necessarily recede when the fighting stops. People have long memories, and so do groups whose identities rest in part on seeing one another as enemies (A.O. Scott, NYTimes, 10/1/2018).

The grace and precision of the performances, not only by Mr. Karam and Mr. El Basha, but also those of the supporting actors push against the director’s fondness for grand statements and obvious ironies. This is an honest assessment of the never-ending conflict between decency and cruelty that rages in every nation, neighbourhood and heart. In Arabic with English subtitles. Available at Isaac Waldman Jewish Public Library, JCC. 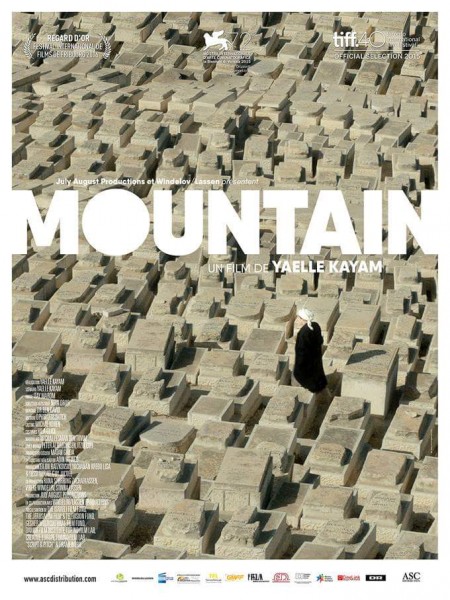 Jerusalem’s Mount of Olives, a vast Jewish cemetery, is the haunting and magnificent locale for the story of a young Orthodox Jewish woman who undergoes a major inner transformation. Yaelle Kayam’s striking first directorial feature, Mountain, weaves a complex portrait of the constrained and lonely life of an Orthodox woman Tzvia, who lives with her husband and 4 children. Husband and children depart together in the morning. She is alone all day, and often her husband works late at night. He rebuffs her sexual advances. The breakthrough performance from Shanie Klein is riveting. She finds solace from her small cottage and isolation by wandering through the cemetery, day and night. The viewer is caught in this no-man’s land, with a view of Al-Aqsa mosque (the Temple Mount), the sound of the muezzin’s call, the Jewish tourists, and a group of pimps and prostitutes who congregate in the cemetery to do business. Images of Tzvia holding a flashlight and walking up the tomb-filled hillside and of cavern-like interiors of the family home, convey the sense of a living woman entombed. Mountain constantly upends expectations, turning Tzvia into an ever-more intriguing character. The ending is surprising and puzzling, but an appropriate response to a melancholy tale of living amid the dead. In Hebrew with English subtitles. Available at Isaac Waldman Jewish Public Library, JCC. This handsome adaptation of Irene Nemirovsky’s epic novel vividly depicts French rural life under the Nazis. In Nazi-occupied France, the bucolic yet class-driven life of the small town of Bussy is turned upside down by the arrival of refugees from Paris and jackbooted soldiers from Berlin. Haughty Madame Angellier (Kristin Scott Thomas, age 58) and her daughter-in-law Lucile (Michelle Williams) are forced to billet a German officer Bruno von Falk (Matthias Schoenaerts) who plays poignant melodies on the piano. This is a rewardingly complex and disarmingly compassionate movie. One movie critic said that “Iffy scripting decisions can’t thwart the romantic allure of this handsomely crafted, sincerely performed wartime weeper.” I agree!

All films, except the Israeli movies, are available at Black Dog Video on Cambie Street for less than $6.00. If you Google the name of the movie and add “where can I watch it?” you will find many internet sites where you can either pay to rent it or pay to download it and watch it—Amazon Prime, iTunes, Netflix, Google Play, Vudu and Hulu for example. They all stream movies but it takes forever for recent films to show up on their lists. They are good at streaming television series, documentaries and older movies. Use your search engine to find what and where movies are available.