Elite Zexer, the Israeli first-time director of Sand Storm, uses her filmmaking skills to create an intense family and social drama reflecting the opposing forces of Bedouin tradition and Israeli modernity in a village in the Negev desert. The disturbances of the characters are not those of the natural world but rather those in the intimate corners of the human heart. The story is framed by two weddings, neither marriage is especially joyous, at least for the brides. Here, in this rundown desert hamlet, tradition is passed generation to generation, from mother to daughter. Daughters, in turn, are passed from family to family (Manohla Dargis, New York Times, Sept. 27, 2016).

Modernity comes with Layla, (Lamis Ammar) having driving lessons with her father Suliman (Hitham Omari) secretly. She is studying at university (her grades are not great), where she falls in love with a young man from another village (forbidden). Her father is about to marry his second wife, a woman much younger than Layla’s mother Jalila (Ruba Blal), mother of his four daughters. This may be the reason for the new marriage. Layla’s romance is discovered, her mother forbids her to see the young man, the mother is ostracized from the home, and the father makes new arrangements for Layla to be married to a local man.

The texture of daily life is portrayed with resonant physical details and sweeping, scene-setting views. The peeling walls of Jalila and her daughters’ austere house convey volumes 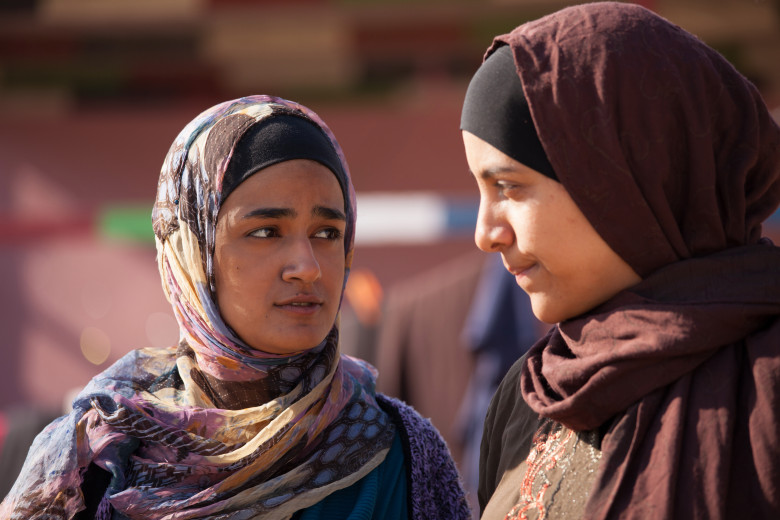 about their struggles. Jalila must organize the wedding celebration for her husband and his new bride. Layla navigates between the two radically different worlds. Suliman teaches his daughter to drive and allows her to study but he is bound to adhere to the tribal customs of his Bedouin culture. The complex way these relationships play out is this film’s central dynamic and creates an urgent family drama, as tense as any thriller, with excellent acting in a believable context.

Zexer reportedly studied Bedouins for years before making “Sand Storm,” and there’s a feeling of anthropological exactness to many of its details (Godfrey Cheshire, Sept. 28, 2016).

The film won 6 Ophirs, its country’s Oscars. In Arabic with English subtitles.