Portrait of an Artist: Lori Goldberg

Portrait of an Artist: Lori Goldberg I met Lori in her studio in the Commercial Drive district one Saturday morning. I was surrounded by canvases brimming with color, from various periods of her artistic career. There were paintings of trees, flowers, still life of fruit and canoes, and a large body of recent work about our garbage. I was drawn to a Monet-inspired painting titled Underneath the Water Lies the Truth, that portrayed a beautiful reflected light and water lilies disrupted by discarded plastic rubbish floating in the water.

She is a founding member of the Salish Sea Artist Residence, connecting artists to work with recycling facilities. She views the things we discard and label “garbage,” scrap metal, car tires, plastic bottles, as reusable materials that can be transformed into art. In this way, the artwork brings awareness to the public about the impact our refuse is having on our environment. Perhaps the idea of transforming garbage into art came to her at age 8, when her father, Myer Goldberg, introduced her to a local garbage dump. Her senses were bombarded by all the stimuli. The experience was ingrained in her memory! When she was in grade 12 she made a film on pollution, for which she used Tom Lehrer’s hilarious song Pollution, in which he advises American travelers: “Don’t drink the water and don’t breathe the air.”

Recently Lori had an exhibit titled “Poetics of the Discarded” at the South Main Gallery in Vancouver. These paintings are not only a creative exploration, but also a cathartic response to the overwhelming experience of visiting many refuse sites in British Columbia.

As a visionary artist, Lori takes on the role of an outsider looking in, her mission is to observe things that are hidden, and expose them.

Ms. Polly Puffer and her Coat of Debris, which adorns the cover of this magazine, depicts an imagined constructed portrait of objects “en masse” that we, as a society, have chosen to discard and disregard. Lori sees our discarded objects as a collective memory. 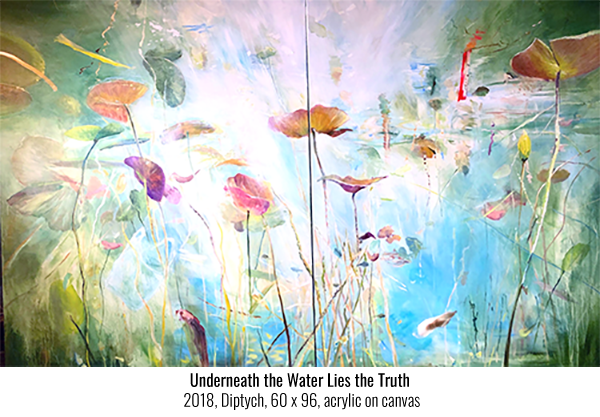 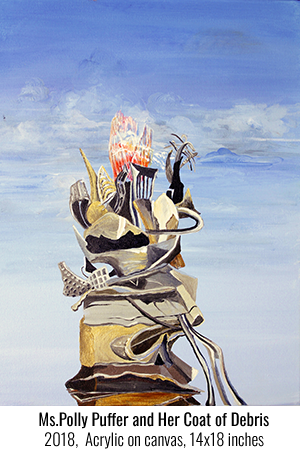 ‘Our lives are filled with objects and every object has a story and a meaning that goes along with it: Where did it come from? Who gave it to us? Was it an inheritance? Who are the people connected with these objects? Even if the objects have been discarded, their memory lives on within us.’

Objects, no matter their worth or value, have a story; some more meaningful, universal and valuable than others. Lori’s work over the many years that I have known her, has been a continuous exploration into the world of objects. Some are religious artifacts, a Mezuzah, a Torah pointer, Hebrew letters; and some are memories of raising children, a baby shoe, a pacifier, a child’s hat, a lock of hair. Yet, there is a single common thread that runs through all of them, they are invested with deep personal meaning, an empowering psychological space in a complex and uncertain world.

A Canadian artist, fully aware of her country’s history and culture. 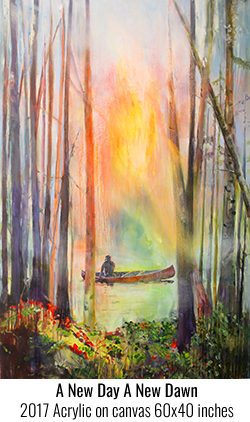 In 2017 Lori mounted an exhibit titled “Making Love in a Canoe” based on the Canadian historian Pierre Berton’s definition of a Canadian as “someone who knows how to make love in a canoe without tipping it over.” Lori, a Canadian through and through, for whom Indigenous and colonial history are of utmost importance, embarked on a series of paintings of canoes. The canoe occupies an iconic place in the Canadian cultural imagination. The result is a magnificent variety of canoes, most without a paddler. The canoe, says Lori, contains multiple layers of symbolism; as a means of transportation, it is symbolic both in Canadian and Universal culture and beyond; the aboriginals used to put their dead in a canoe and send them off on their last voyage. The canoe is a symbol of transformation, of venturing into the unknown.

The artwork of Lori Goldberg is a window into worlds that we don’t always see or think about; or which we wish to ignore or deny. Her next body of work will surely continue to inspire and provoke us, thus making a difference in our lives.

Lori Goldberg’s work has been shown in major exhibitions in Vancouver, Toronto, Seattle and Hamburg. She is currently teaching at Emily Carr University of Art and Design.