Food In Story and Song

Food In Story and Song

The fourth of the Jewish Seniors Alliance Snider Foundation Empowerment Series of 2016-17 was held in partnership with Kehila Society in Richmond, and the Jewish Museum and Archives of B.C. on Monday, June 26th, 2017. The first of the series was held in November 2016 with the Shalom Aleichem seniors of the Vancouver Peretz Centre; the second was in January 2017 with the J.C.C. seniors and the third at the Unitarian Centre in April 2017.

The theme this year was:

“Eating our way through Jewish History:  FOOD—The Doorway to our Culture”

On June 26th, one hundred and fifty of us enjoyed “A Day in the Life of Israel”.  We were served an Israeli lunch consisting of platters of humus, falafel, pita, Israeli salad, couscous, and cake for dessert. We all savored the delicious lunch.

After lunch we all moved to the sanctuary at Beth Tikvah Synagogue, where Ken Levitt, president of Jewish Seniors Alliance, welcomed everyone.  Michael Schwartz of Jewish Museums and Archives reviewed the partnership of this series featuring Jewish food, and introduced the guest artists.

We were then wonderfully entertained by music provided by Caviar and Lace featuring Saul Berson and Michele Carlisle.   This superb duo with Michelle on keyboard and Saul on clarinet, saxophone and flute, got us moving, clapping and singing to Hebrew and Yiddish melodies.

There were great renditions of Heinai Ma Tov in two parts and Heiveinu Shalom Aleichem. The concert ended with a medley of wedding songs. The audience was thrilled and enthusiastically applauded Saul and Michelle.

Toby Rubin of Kehila Society, thanked the guest musicians and everyone, for coming.  It was indeed a great finale to the 2016-17 Empowerment Series. 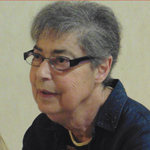 BACK TO Elders Empowering Elders 2016-17