Movies In The Spotlight: The Human Resources Manager 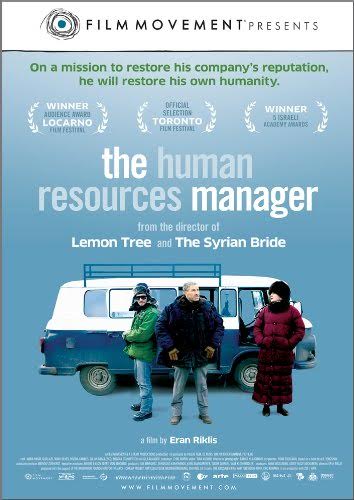 You would be forgiven if you did not see this movie: The Human Resources Manager,

. Even though it won five Ophir Awards and was selected as the Israeli entry for the Best Foreign Language Film in 2010, it did not receive general distribution.

A black comedy/ drama based on the book A Woman in Jerusalem by A. B. Yehoshua, it begins as a bakery manager (Mark Ivanir) learns that a bottom-rung employee has died in a suicide bombing. To forestall bad publicity, the manager’s boss (Gila Almagor) assigns him the task of accompanying the victim’s body to her homeland for burial.  The director, Eran Riklis, shifts abruptly from backroom mystery to picaresque comedy. Landing in some Godforsaken, unnamed country, the manager trundles across a frigid, post-Soviet wasteland studded with abandoned nuclear power plants and bureaucratic dysfunction. Jeannette Catsoulis of the New York Times did not like the movie—“a disappointingly shallow story in which only the dead are named, and the living are reduced to stereotypes.”

I enjoyed the wit and irony of the characters and the laughed at the exaggerations and contradictions. “There is an Israeli consul and her Italian husband which add to the fun. The Human Resources Manager wants “to do the right thing.” But this road trip has many sharp curves and detours which thwart his good intentions. He finds emotional connections in this dreary landscape; realizing that he has been an absent father and estranged husband at home. Catsoulis writes “What begins as an engaging drama soon dissolves into a Kafkaesque search for a nonexistent homeland—for a place, quite literally, to rest.” I appreciated the movie even more the second time!