Movies in the Spotlight: The Green Prince

After the documentary The Gatekeepers, after the movies Omar and Bethlehem, comes the gripping documentary thriller The Green Prince (2014) which is based on the book Son of Hamas, an autobiography written by Mosab Hassan Yousef, the oldest son of Sheikh Hassan Yousef, a founding member of Hamas. The director 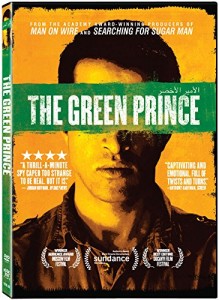 Nadav Schirman, a producer and writer, known for The Champagne Spy (2007) and In The Dark Room (2013) reveals in this trilogy of films, his fascination with extra-ordinary personalities, secrets and violence.

The Internal Security Agency “Shin Bet” and its handler Gonen Ben Yitzhak sets Mosab Hasson Yousef on a path which leads to spying for Israel through his role as the eldest son being groomed to take his father’s place in the organization Hamas, the Palestinian Islamic Resistance Movement. For ten years he is both manipulated by Gonen and, due to his personal experiences in jail and with Hamas members, Mosab changes not only his ideas of revenge and violence but also his ethics and philosophy of life.

The emotional core of The Green Prince is the deepening relationship of this young Palestinian, Mosab, with his Israeli handler, Gonen. Mosab feels the “greatest shame” for his collaboration and betrayal of his family and culture; Gonen exalts in his “greatest prize” in the history of Shin Bet. The two main characters play themselves, the dialogue is superb. The film alternates the recollections of Mr. Yousef, code-named Green Prince, and his Israeli handler, Gonen, in a he-said, he-said format. In this case, the two stories augment, rather than contradict each other (Stephen Holden, New York Times Review).

The results of this collaboration were the prevention of dozens of suicide attacks and the engineering of many arrests, including that of Yousef senior.

Apart from the testimony of each man, we see revealing and shocking archival footage of Hamas, the organization and its activities, and of the brutality of the Intifada, the multiple suicide bombings in Israel; scenes which CNN refuses to show us.

The truth is put on trial in this arresting story. The final quarter of the film is the most startling; both men try to “do the right thing” which has severe personal repercussions. The set is simple, stark and evocative of isolation, manipulation and torture. The film won many prizes and awards. It is in English.