Movies In The Spotlight: Dig, Season One 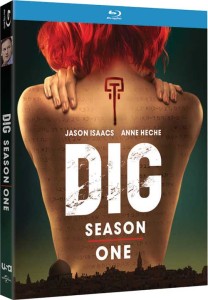 Dig, Season One is the television drama series co-produced by Gideon Raff and Tim Kring which follows חטופים  (Prisoners of War) , Homeland and Heroes.  A red calf is born in Norway, an eerie 12-year old boy is raised in captivity in new Mexico and a young American archaeologist is murdered Jerusalem. This is Indiana Jones meets ההסדר (Time of Favour). Dig brings Biblical archaeology to prime-time television. If you love hearing Hebrew, if you love seeing the streets and tunnels of Jerusalem, if you love conspiracy theories, you will enjoy this romp through Christian and Jewish extremism. The show intricately weaves three seemingly unrelated storylines together to create a conspiracy born out of the Dead Sea Scrolls and the Essenes to resurrect the Temple in Jerusalem.  The locals are superb, the violence at times graphic, some of the names, places, dates and even methods are correct, but the writers and producers do not let themselves get bogged down by facts and accuracy. The actors are very good, their relationships well thought-out. Dig represents American mystery/action-thriller television at its best. Sit back and enjoy the ride!

In English and Hebrew with English subtitles. Not recommended for children.