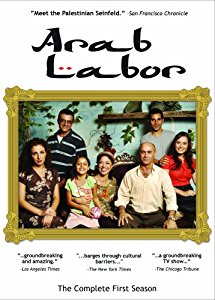 Arab Labor עבודה ערבית 2007, the first season of a television series, is a raucous sendup, a “no-holds-barred” parody and a loving criticism of all that is problematic in the Arab-Israel/ Muslim-Jewish situation in Israel. The series, whose title in colloquial Hebrew carries the implication of “shoddy or second-rate work,” focuses on the family and work situations of Amjad, an Arab-Israeli journalist working for a Hebrew language magazine in contemporary Israel. Sayed Kashua, the creator of this semi-autobiographical sitcom, pokes fun at the cultural divide between Jews and Arabs. Kashua’s characters play on religious, cultural and political differences to depict the mixed society prevalent in Israel. Much of the comedy is derived from the paradox of Amjad’s love-hate relationship with his Arab identity and his simultaneous wish to integrate comfortably into Israeli society.

The ensemble cast is uniformly excellent, and the writing skillfully walks that fine line between the dark absurdity of its situations and the humanity of its characters. Salim Dau, who plays Amjad’s perennially scheming father, steals practically every scene he is in. The dual and dueling childbirth episode in the hospital is one of the funniest half hours I have ever experienced. I loved it. Put aside your ‘sensitivities’ and your politics and enjoy the fun.

The series is in Arabic and Hebrew with English subtitles

Movies in the Spotlight: Policeman השוטר
Schedule of Volunteer Training and Opportunities