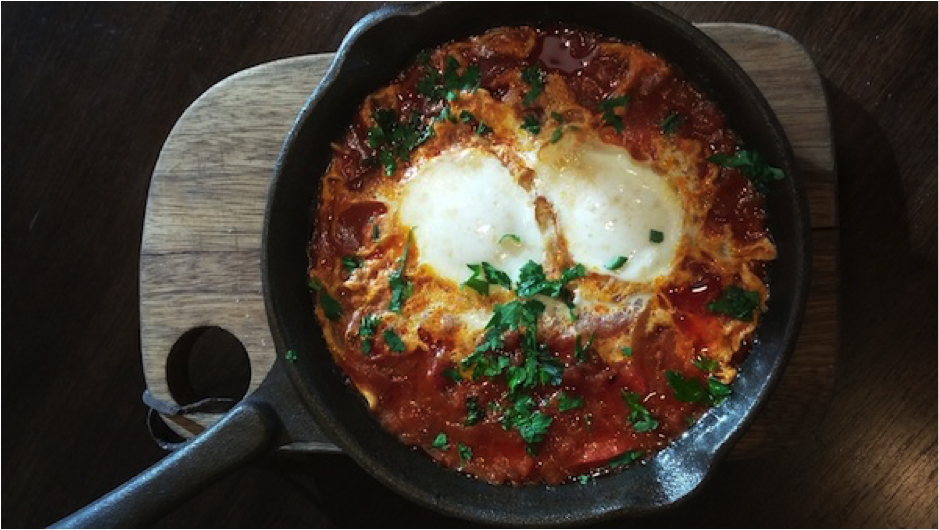 Shakshuka is a combination of flavours, aromas and colours that appeals to all our senses.

Choosing a dish that defines us gastronomically is an impossible task because Jewish cuisine comprises a long and varied history of aromas and flavours fused by our many journeys around the world. But, if we narrow our task to discussing a representative Israeli dish, then shakshuka might be it.

Although there are many variations, shakshuka is generally made with stewed tomatoes, spices and eggs. It is one of the foods most loved by Israelis and it is a dish that has been enjoyed by countless tourists to the country. It is said that its secrets were brought to Israel by Jewish immigrants from North Africa but, for me, it also has a taste of home. My parents used to prepare it to pamper us, using the recipe of my grandparents from Turkey and giving it an Argentine touch. And there is nothing like shakshuka as an example of how certain foods have traveled with us throughout our history and to the different countries in which we have settled.

Shakshuka means “a mixture.” It is a combination of flavours, aromas and colours that appeals to all our senses. In Israel, it is often eaten for breakfast, a bright and spicy way to start the day. But it is also an excellent dish for lunch or for a special brunch.

Like many great dishes, there are as many versions of shakshuka as there are cooks who have made it, and it can be found on café and restaurant menus throughout the world. Modern culinary interpretations enhance the basic dish with salsa, with all kinds of vegetables, including eggplant and kale, and with cheeses such as feta. Some even incorporate meat into the recipe, modifying it according to personal taste. Some variations replace the tomatoes entirely – for example, there is a version that replaces the tomato sauce with one of spinach and cream.

Although there are many ways to cook shakshuka, from the Mexican version called huevos rancheros to the Turkish menemen, my shakshuka cuts to the traditional. The recipe below will give you a lovely shakshuka, rich in flavour. Once you have mastered the basics, you can add your own touch by using other ingredients that you like. However, this dish has one must: it must be accompanied by pita, challah or one of your favourite breads. Why? Simply because the sauce is really delicious and you will not want to leave a drop of it in the pan.

But, enough talk. This recipe I’m sharing is special – it is the one my family uses and which has given us many beautiful memories. It makes enough for two people.

Reprinted with permission; For the full article, visit http://www.jewishindependent.ca/?s=shakshuka