The Development of the Jewish Community in BC

Please click this link to view a video about the Jewish Restoration Project that has taken place over the last 2 years:
https://www.youtube.com/watch?v=bSPNzrjCLK8&feature=youtu.be Jewish Cemetery Preservation (vandalized, that is, before the restoration)

As the California Gold Rush petered out in the late-1850s, word spread that gold had been found in the Fraser Canyon of BC. Jewish shop owners were among the first adventure-seekers to arrive in the young British colony, intending the repeat the success they had had in California, outfitting prospectors heading out into the brush.

Jews settled in the urban center of Victoria, as well as the mining towns of Lillooet, Yale, and Barkerville. Within five years of the first arrivals, the Victoria community had grown to 119 families and work began on a synagogue. The laying of the cornerstone of Temple Emanu-El in June 1863 was celebrated with a multicultural parade through the city, and the first services were held in September. The congregation remains active today, in the same building inaugurated over 150 years ago.

Savvy community members made their way across the water to the town of Granville when it was selected to be the terminus of the Canadian Pacific Railway in 1886. Renamed Vancouver, the waterfront settlement began to grow quickly. Members of the Jewish community were involved in the city’s growth from its earliest days. David Oppenheimer, the second-youngest brother of a successful merchant family served as the city’s second mayor and oversaw the construction of sewers and drinking water lines, the establishment of the fire department, and as his first act in office, acquired a former military reserve from the dominion government and converted it into Stanley Park. Recognized as the “Father of Vancouver”, his bust stands today at the entrance to the park.

While striving to build successful businesses from the ground up, the first Jewish families, including the Fleishman, Franks, Gintzburger, Gold, Petersky, and Weaver families also found time to lay the foundations of our Jewish community. Religious services were held in shops, homes, and rented halls before work began on the construction of B’nei Yehuda (later Schara Tzedeck) synagogue in the working class neighbourhood of Strathcona (at the time known as the East End) in 1911. In addition to active Orthodox and Reform congregations, numerous community organizations were established, including B’nai Brith, the Hebrew Free Loan Association, and local chapters of Hadassah, National Council of Jewish Women, and Canadian Jewish Congress.

As families achieved financial success in the 1920s and 30s, many moved out of Strathcona and into the more middle class Fairview. Community institutions followed the population. In 1928, the first Jewish Community Centre opened at Oak Street and 11th Avenue, taking over many of the community services previously provided by the NCJW Neighbourhood House, and serving as a permanent home for the Vancouver Talmud Torah.

In the years following World War Two, the population of Vancouver grew tremendously and so too did the local Jewish population. From Fairview, the community grew south into the newly developed neighbourhood of Oakridge. Synagogues sprang up along Oak Street, representing congregations of diverse denominations. The Talmud Torah moved to a purpose-built facility at Oak and 26th in 1948 and the JCC relocated in 1962 to the intersection of Oak and 41st. It was joined in 1968 by the Louis Brier Home for the Aged on the opposite corner.

Michael Schwartz
Coordinator of Programs and Development
Jewish Museum and Archives of BC
6184 Ash Street – Vancouver BC – V5Z 3G9
604.257.5199
mschwartz@jewishmuseum.ca 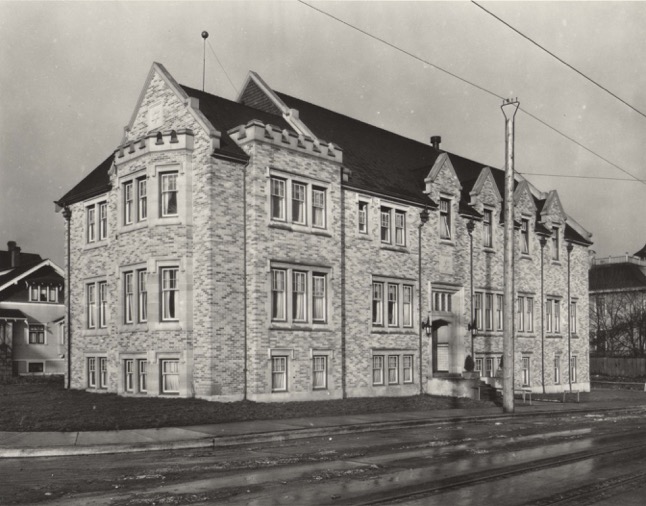 Temple Emanu-El, built in 1863, is the oldest synagogue in continuous use, west of the Mississippi (L.06630)