Combatting Ageism in the World of Theatre

Combatting Ageism in the World of Theatre

You attend a local play somewhere in Greater Vancouver. There is an elderly character in the play. After the performance, you proceed to the exit, and on your way through the lobby, you catch a close up view of the actor who played the role of the elderly character. It becomes clear to you that this actor is much younger than her character, having used clever make-up to give her the aged look the role demands. You think: great actor, and great make-up artist.

But there is another perspective you could have added to these thoughts: why didn’t the director simply cast an older woman?

Ageism in the world of theatre

It is more likely than not that an older part will be given to a young actor. In some instances there may be a good reason for that. But in many cases, the assumptions associated with ageism are a determining factor. For example, a producer or director may assume that an older actor no longer has the physical stamina needed to handle the challenging working conditions involved in performance: eight hours a day of rehearsal, six straight days a week, for many long weeks. Another assumption might be that with advanced age, senior actors will have difficulty memorizing their lines.

But if a director was willing to challenge those assumptions and cast on older actor, he might benefit from her many extra years of acting experience and perhaps, even more important, her entire lived experience. Memorizing lines is a learned skill. A senior actor has learned that skill. She has also learned to develop the stamina required to deal with long life’s challenges. As well, the director may find that the senior actor can provide mentorship to the younger actors.

Jane Heyman, pioneer in the theatre world of Vancouver

At this point I want to acknowledge the valuable assistance that I have received for this article from my good friend Jane Heyman, a highly-recognized, Jessie Award winning director and acting teacher in Vancouver. She was the Associate Director of Langara College’s Studio 58 drama program for 20 years, teaching, directing and mentoring hundreds of theatre students, many of whom have become the leading directors and actors we see in the performances of today. She is also involved in many performing arts organizations, and co-founded the Women in View Festival, which ran from 1989 to 1999, when it became a victim of cuts to government arts funding.

I mention Jane here because of a story she told me about a play she had directed a number of years ago, in which she had cast a 79 year old actor to play an 80 year old character. In one scene, the character needs to be joyful at a homecoming. The actor asked Jane if she could do a dance to express the joyfulness. Jane agreed, and the scene, and the play, were a big success. Jane suggested to me that a younger actor would not have come up with the dancing idea, in part because she would have been unable to imagine an 80 year old dancing, having unconsciously made the assumption that those in their 70s or 80s don’t dance! 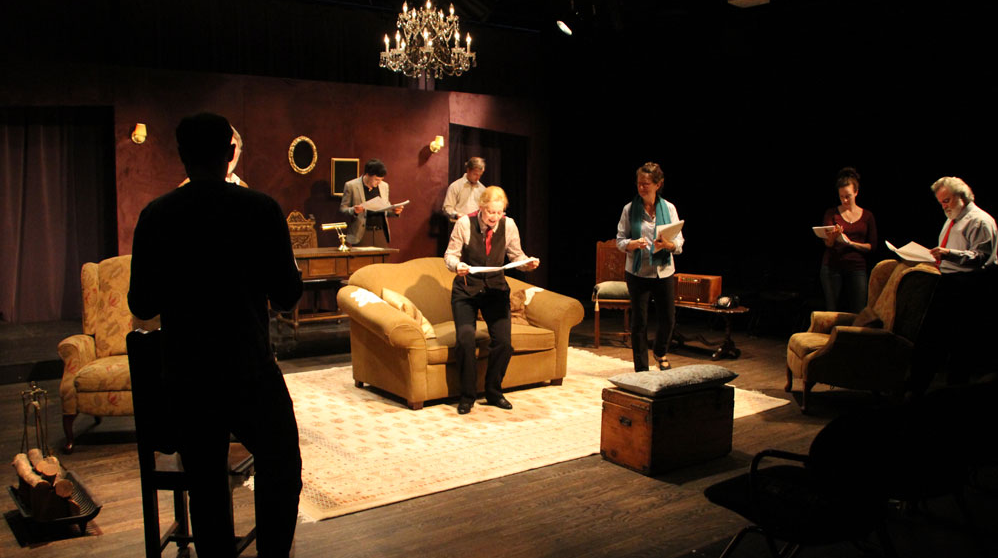 Returning to the question of why directors might not cast a senior for a role? A shortage of available senior actors is not one of them. According to a survey completed in 2019 by the Senior Support Task Force Committee of the Canadian Actors’ Equity Association, the number of their member actors, directors and other professionals over 65 has risen from 514 to 1089 in the past ten years. Most said they wanted to work more but the greatest challenges were identified as: limited or lack of opportunity, including fewer age-appropriate roles written for senior artists, and a casting reluctance based on age. The Task Force is committed to reducing these challenges.

Senior actors play the roles of all ages

In the meantime, however, a professional theatre company has emerged in Vancouver to turn ageism on its head. It casts seniors in younger roles!

Western Gold Theatre Society is a professional non-profit theatre company founded in 1994 by the late Joy Coghill O.C., in response to the dearth of roles for professional senior actors in the Vancouver area. According to its website – WesternGoldTheatre.org – Western Gold is committed to producing plays of the highest quality and relevance to audiences of all ages. In some of their plays, senior actors play younger roles, including, as one example, roles as young lovers in an embrace. For the reasons mentioned earlier, senior actors, using a breadth of life experience, are credible and entertaining in these roles.

Western Gold Theatre has a tag-line I love: “Creativity has no expiry date.”

I would add: going to plays to enjoy the creativity of senior actors also has no expiry date. I urge readers to contact Western Gold (604-363-5734) and order tickets for some of their 2020 offerings. With one step you will be treating yourself to high quality entertainment at very affordable prices, and at the same time combatting ageism in the world of theatre. Western Gold productions take place at the PAL (Performing Arts Lodges) Studio Theatre in the Coal Harbour neighbourhood of Vancouver, at 581 Cardero Street, just north of Georgia Street.

Books To Curl Up With – Spring 2020
Portrait of an Artist: Michael Seelig