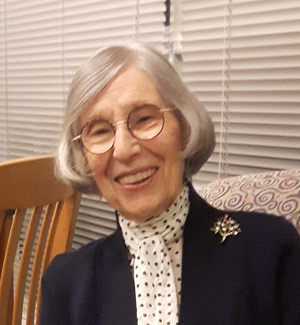 Several years ago, Janet Shier approached Grace Hann and myself at Jewish Seniors Alliance and requested a friendly visitor volunteer. Upon meeting Janet, we met a youthful, intelligent and impeccably-dressed woman of 98 years old.

Janet was shortly matched with one of our peer support services volunteers and began to have weekly visits. Janet began to look forward to those weekly meetings with her friendly visitor.

Each week Janet and her JSA volunteer would either go out for a walk for coffee, shop or do errands. Janet advised that she clicked with her volunteer, as it was a good match and found her volunteer to be highly intelligent and a good conversationalist. Although Janet is in good health, she confides that her hearing isn’t that strong so that over the years she has had more challenges understanding some of the other residents at Cavell Gardens who speak very softly.

This, at times, could be challenging, so for Janet having a volunteer who she could communicate with and hear easily reduced her sense of isolation, giving her increased social and emotional support.

Janet has a history of giving, doing mitzvoth (good deeds) and of tzedakah (charity). In 1948 she began to volunteer with Hadassah, raising money for Israel. As a young adult she joined the Council of Jewish Women, volunteering her time and donating financially to the Jewish Community in Canada and in Israel; she also volunteered at the JCC.

She was born in Montreal, married and had children. In 1991, at the age of 71, she moved to Vancouver to join her youngest daughter, son-in-law and grandchildren. She started a new life. Her daughter and son-in-law began new careers in education.

In 1994, she moved to Cavell Gardens Assisted Living Centre and there she organized a knitting club which was very successful. The knitting club raised money from the sale of their knitted clothes and donated the funds to the Jewish Food bank and to Eastside Vancouver single women and babies. In addition she created a newcomer’s welcome program at Cavell Gardens.

Jewish Seniors Alliance and Senior Line Magazine celebrate and congratulate Janet for her many years of volunteering her time to various community causes and for enriching the lives of the volunteers who visit her as a friendly visitor.