“Beginning a New Chapter” and “Intrigued by Weight Training “

Jewish Seniors Alliance > Ask Hannah Archive > “Beginning a New Chapter” and “Intrigued by Weight Training “
The verdict is in! Exercise, any form of strenuous movement done safely, is beneficial physically AND MENTALLY. Positive gains in physical strength and balance as well as the enhancement of mental functioning, especially memory, are possible at any age. The two letters which follow have led me to the same topic: Resistance Training, Aerobic Exercise and Cross Training for Physical and Mental Health.

I had my 65th birthday this year and I am beginning to understand that this is not the end of the story, but rather, it is just the beginning of a whole new chapter in my life. I am a retired administrative assistant who has spent the last 25 years seated in front of her computer. Suddenly I have time for myself, my role is now distant grand mother, not mother. Furthermore, my husband loves golf, plays all year round and took up cooking the meals. There are so many options and so much advice out there, where do I start?

For the last twenty years I have been going to the gym regularly, riding the stationary bike, lifting a few weights and swimming three times a week. I am bored. At the age of 74, I want a new challenge, a new direction for my physical exercise routine. I am a widower, in good health, with an adequate income from my investments. My friend is a ‘friend” of yours on Facebook, and saw photos of you lifting heavy weights in a “muscle gym.”  I am intrigued. Tell me about it!

I would bet that your children and grandchildren live far away. I would bet that you moved to Vancouver from elsewhere less than 25 years ago. Your circle of friends and acquaintances has probably diminished due to illness and death? Perhaps physical limitations have slowed you down? 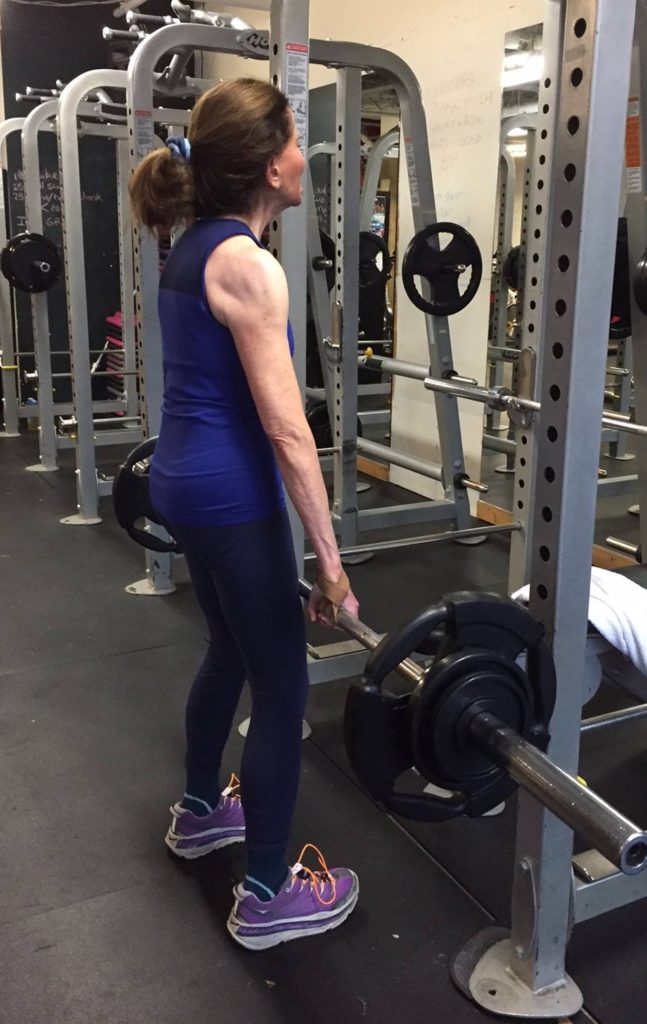 At the age of 75 I took up weight training (resistance training) seriously. I bought a squat rack, a barbell, weights, kettlebells and medicine balls; I hired two trainers to coach me. I now workout three times a week—with Martina Yabecova at Train on Main, and with Zuzana Fajkusova and Nikki Lefler, as well as Laina Barber in my home gym. The results are phenomenal; my bone density, which was at the danger level, has increased to a normal healthy level. I have gained muscle and lost fat; and my rowing, cycling and step-machine times are getting better. I have taken on increasingly more intellectually-challenging obligations for JSA, using new creative and computer-skills activities.

I am not alone. Seniors are going to the gym, taking private sessions with trainers and participating in cross-training classes which incorporate weight training with aerobic exercises. The science of fitness is well-documented:

Every form of exercise that speeds up your heart rate increases blood flow to the brain and improves brain function. Lighter weights are just as effective as heavy ones. As long as you attain almost total muscular fatigue, you will gain strength. Exercise augments adult neurogenesis which is the creation of new brain cells in an already mature brain. Weight training and aerobic exercise lead to the creation of additional blood vessels or new connections between brain cells or between different parts of the brain.

Norman Doidge describes in his book, The Brain’s Way of Healing, ways to stave off dementia. First on his list is “Exercise (defined as vigorous exercise or walking at least two miles a day, or biking 10 miles a day).

Exercise was the most powerful contributor to decreased risk of both general cognitive decline and dementia. It promotes the general cellular health of neurons and glia (the cells surrounding neurons).

Did you know that dementia rates have been plunging? Believe it or not, the latest report finds a 20 percent decline in dementia incidence per decade, starting in 1977. With more older people in the population every year, there may be more cases in total, but an individual’s chance of getting dementia has gotten lower and lower.

So dear “Beginning a New Chapter” and “Intrigued by Weight Training”, have I convinced you to get yourself to a gym—sign up for a weight training or cross-training class for seniors? They exist everywhere, at JCC, at UBC, at the YMCA and at your local fitness centres. Join other seniors who, instead of praying for a cure for dementia, are out there exercising at least three times a week for an hour in order to delay or stave off dementia. You will increase your physical, mental and emotional well-being immediately—that is, there is instant gratification! Forget about long-term goals; rather, you will enjoy the actual physical movements, the interaction with a trainer or the others in your group, and the pride of adding another two pounds to the barbell. Gretchen Reynolds states “Being out of shape could be more harmful to health and longevity than most people expect…poor physical fitness may be second only to smoking as a risk factor for premature death.”

Being Unfit May be Almost as Bad for You as Smoking, Gretchen Reynolds, New York Times, July 27, 2016.

Which Type of Exercise is Best for the Brain?   Gretchen Reynolds, New York Times, February 17, 2016.